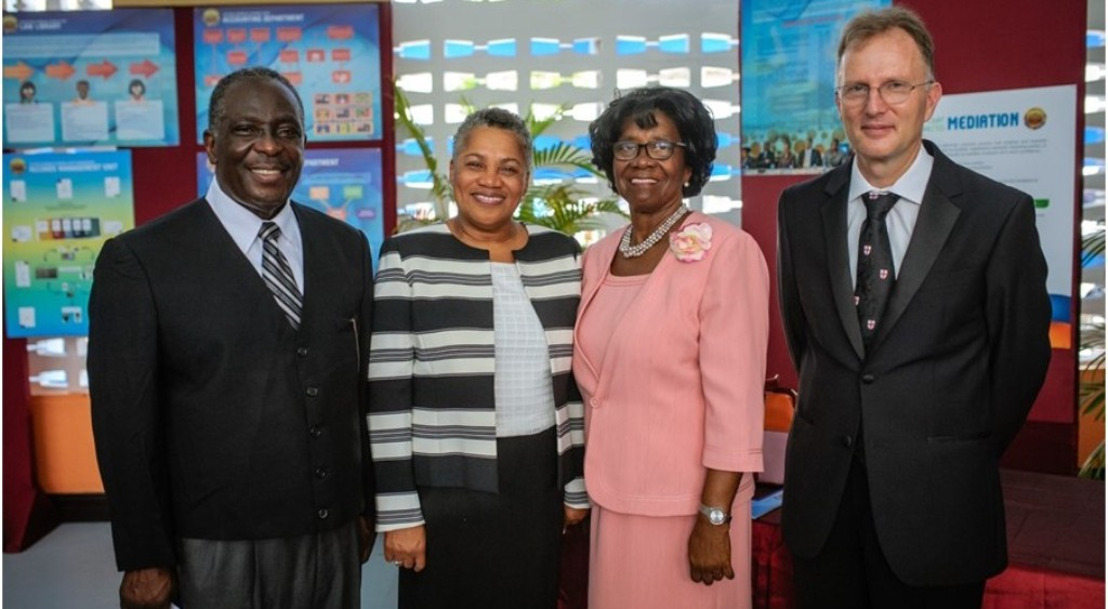 The Opening Ceremony was held on October 9th, 2017 at the Castries City Hall. The exhibition will be open for five (5) days from 9:00 am to 4:30 pm daily. The main objective of the exhibition is to give the people of Saint Lucia a better understanding and appreciation of the inner workings of the Eastern Caribbean Supreme Court.

The event gave Her Ladyship, the Hon. Dame Janice Pereira, Chief Justice an opportunity to speak directly to attendees for the first time since several of our neighboring Caribbean islands, including the Court’s Member States and Territories of Anguilla, Antigua and Barbuda, the Commonwealth of Dominica and the Virgin Islands were severely impacted by catastrophic hurricanes Irma and Maria.

Her Ladyship also used the opportunity to remind attendees of the resilient nature of the people of our region and their ability to rise from adversity and thrive in the most trying circumstances.

"The Eastern Caribbean Supreme Court is an example of the power of the people of our region and a demonstration to all that we can achieve when we work together," Her Ladyship added.

The ceremony was attended by Her Excellency Dame Calliopa Pearlette Louisy, Governor General of Saint Lucia, Judicial Officers of the Court of Appeal and High Court, Staff of the Eastern Caribbean Supreme Court’s Headquarters and the Saint Lucia and Territory of the Virgin Islands High Courts, members of the Diplomatic Corps, members of the Public and Private Bar, District Education Officers, management and staff of our partner agencies and members of the public.

The Eastern Caribbean Supreme Court (ECSC) was established in 1967 by the West Indies Associated States Supreme Court Order No. 223 of 1967. The (ECSC) is a superior court of record for the Organization of Eastern Caribbean States (OECS), including six independent states: Antigua and Barbuda, the Commonwealth of Dominica, Grenada, Saint Kitts and Nevis, Saint Lucia, Saint Vincent and the Grenadines and three British Overseas Territories (Anguilla, British Virgin Islands, and Montserrat). It has unlimited jurisdiction in each member State.

To learn more about the Eastern Caribbean Supreme Court (ECSC) please visit our website @ https://www.eccourts.org/ or call us at Tel: 758-457-3600.