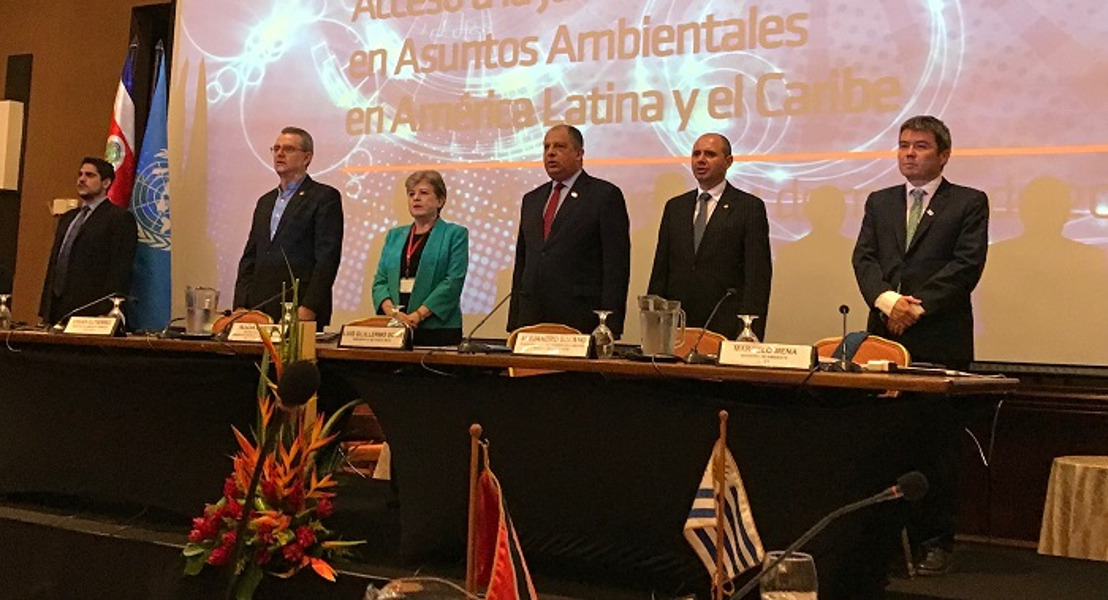 First, why is it called the Escazu Agreement and what is its relevance to Saint Lucia ? It is called the Escazu Agreement because it was endorsed by 33 Countries including Saint Lucia at Escazu, San Jose, Costa Rica. This endorsement which took place at a high level segment on March 4, 2018 was the culmination of  nine ( 9) formal meetings of the Negotiating Committee, as well as several webinars, workshops and consultations held throughout Latin America and the Caribbean on the need for access rights,

This Agreement is important to Saint Lucia as it re affirms the value of a regional and multi-lateral approach to sustainable development. Saint Lucia is a small island and it has always been part of the dialogue on importance of regional integration. This Agreement is another effort at joining forces with others in the region on issues of sustainable development and the environment.

This Agreement aims to combat inequality and discrimination, and to ensure the right of every person to a healthy environment. Essentially, it places equality at the core of sustainable development. It is so important that John H. Knox, who is the UN Special Rapporteur on Human Rights and the Environment, has dubbed it “One of the most important human rights Agreements, as well as one of the most important environmental Agreements of the last 20 years.

The importance of access rights was highlighted at the UN Conference on Environment and Development in 1992 in Rio De Janiero. Brazil where 178 countries declared “ that environmental matters are best handled with the participation of all concerned at the relevant level; at the national level, each individual shall have appropriate access to information concerning the environment that is held by public authorities, including information on hazardous materials and activities in their communities, and the opportunity to participate in decision-making processes. States shall facilitate and encourage public awareness and participation by making information widely available. Effective access to judicial and administrative proceedings, including redress and remedy shall be provided.”  The Principle 10 (P10) Declaration, which Saint Lucia has signed.

In May 1992, the importance of the P10 principles was again re-affirmed in the outcome document entitled “The Future We Want” at the Rio + 20 UN Conference on Sustainable Development. This paved the way for the negotiations which has led to the Escazu Agreement.

So endorsement now what ?

Since the Regional Agreement is an agreement that was adopted within the UN framework of the UN Commission for Latin America and the Caribbean, that is open to the entire membership of the Latin American and Caribbean Countries (LAC), the Secretary-General of the United Nations thus assumes depository functions for it. Thus the Escazu Agreement, under Article 25 specifies that the original of the Agreement in the two official texts (English and Spanish) are deposited at the United Nations Headquarters, New York, USA, in the care of the Secretary-General of the UN, who currently is Mr. Antonio Guterres. While English and Spanish are the two official languages in which the text of the Agreement was negotiated, the Agreement has also be translated into French and Portuguese, in order to reach a wider audience in the Caribbean.

According to the Chief of the Treaty section, Office of Legal Affairs at the UN Headquarters, New York Dr. Santiago Villalpando, “The Agreement will be open for signature by all the 33 countries which endorsed it at Escazu, San Jose Costa Rica for a full two (2) years commencing on September 27, 2018 through to September 26, 2020”

Only a Head of State (Governor General), Head of Government (Prime Minister) or the Minister of External Affairs are authorized with full powers to sign this Regional Agreement. (According to the International Law of Treaties/ Vienna Convention)

Therefore, should Saint Lucia decide to attend the Treaty event scheduled for Thursday September 27, 2018 at 10 am at the Kuwati Boat, General Assembly Building, UN Headquarters, New York, it must inform the Treaty Section of the UN Headquarters, on or before September 4, 2018 who will attend and sign on behalf of Saint Lucia. Just the name and title of the Authority expected to attend is sufficient.

Saint Lucia has a Permanent Mission in the USA and they are used to preparing Treaty documents so that office with guidance from the Treaty section of the UN will then make the necessary arrangements for signature. The September 27, 2018 opening for signature ceremony is expected to be brief and last for only 30 mins. There is expected to be no formal speeches but just a few brief words from the Executive Secretary of ECLAC Alicia Barcena, after the signing and possibly some remarks by the UN Secretary General.

I It is extremely important to note that should any other Minister including the Minister with responsibility for the Environment and or any other Cabinet Minister (not the Head of State, Prime Minister or Minister for Foreign Affairs)   or other Official, is the person designated to attend the Treaty event on September 27, 2018 in New York, that Minister or other Official, would have to be authorized with an instrument of full powers in order to sign on behalf of Saint Lucia. Again Saint Lucia’s Permanent Mission in New York is used to preparing such Documents and the Office of the said Minister or Other Official would have to inform the Treaty office in New York. Essentially, the Name of the person and a copy of the signed instrument of full powers is what must be sent to the Treaties Office, United Nations Headquarters in New York, USA for the Attention of the Chief of the Treaties Unit, Dr. Santiago Villalpando. This information should also be copied to The Economic Commission for Latin America and the Caribbean (ECLAC) as Secretariat to the Escazu Agreement and also to get the logistics right in planning activities for the day’s event.. Once the Treaties office has received the document in advance for them to review it, they will make the necessary arrangements. Of Course their office remains open for any assistance and clarification should any of the LAC countries need assistance with the process.

Some Countries have also expressed their intention to not only sign on September 27, 2018 but also to ratify and should Saint Lucia wish to do so, it must indicate so to the Treaties Office and with the assistance of its Permanent mission overseas have the relevant documentation prepared. The important thing to note is please ensure that the intent of the Country must be conveyed to the Treaties office on or before September 4, 2018 so that all preparations can run smoothly for the Treaty event slated for September 27, 2018.

Should any of the LAC countries including Saint wish not to attend on September 27, 2018, and instead wish to sign at a later date (any time before September 26, 2020) they must simply inform the Treaties Office (copied to ECLAC) as to a date and time when they so wish and the necessary instruments and arrangements will be prepared according to protocol.

If the September 26, 2020 deadline passes (2 years) and any Country then wishes to become a Party to the Escazu Agreement, they must do so by a process of Accession.

Signature indicates the Country’s intention to be bound by the Agreement at a later date. It creates an obligation in the period between ratification, acceptance and or approval, to refrain in good faith from acts that would defeat the purpose and objective of the Escazu Agreement.

Ratification:  allows Countries time to seek approval for the Agreement at the domestic/ local level and to enact or adjust its legislation to implement the Agreement. Once a State has ratified, it must give effect to the Agreement domestically, according to its Constitutional provisions.

Accession: Accession has the same legal effect as ratification. Unlike ratification (which must be preceded by signature to create legal binding obligations under international law) accession requires only one step, namely the deposit of an instrument of accession. The Secretary General of the UN as Depository has tended to treat instruments of ratification that have not been preceded by signature, as instruments of accession and the States concerned have been advised accordingly. Many environmental Agreements are open for accession, from the day after the Agreement closes for signature. For this Escazu Agreement that would be after the deadline date of September 26, 2020.

Entry into Force:  It is crucial to note that the Agreement will only come into force on the ninetieth (90th.) day after the deposit of the eleventh (11th.) instrument of ratification, acceptance acceptance or approval. (Article 22 Escazu Agreement)

Finally, why should Saint Lucia sign? It will allow a small county like ours to protect the environment and ensure our citizens the right to a healthy and sustainable way of life in an innovative way not previously explored by other prior Multi-lateral Environmental Treaties. It fosters south / south cooperation, provides opportunities for technical assistance, capacity building, lessen conflicts, reduce discrimination and promote equality for all. Moreover, it will recognize the right to a healthy environment as a fundamental human right providing access to information, public participation at all relevant stages of the decision making process and more importantly, access to justice by reducing legal costs and expanding the scope of legal standing (among others).