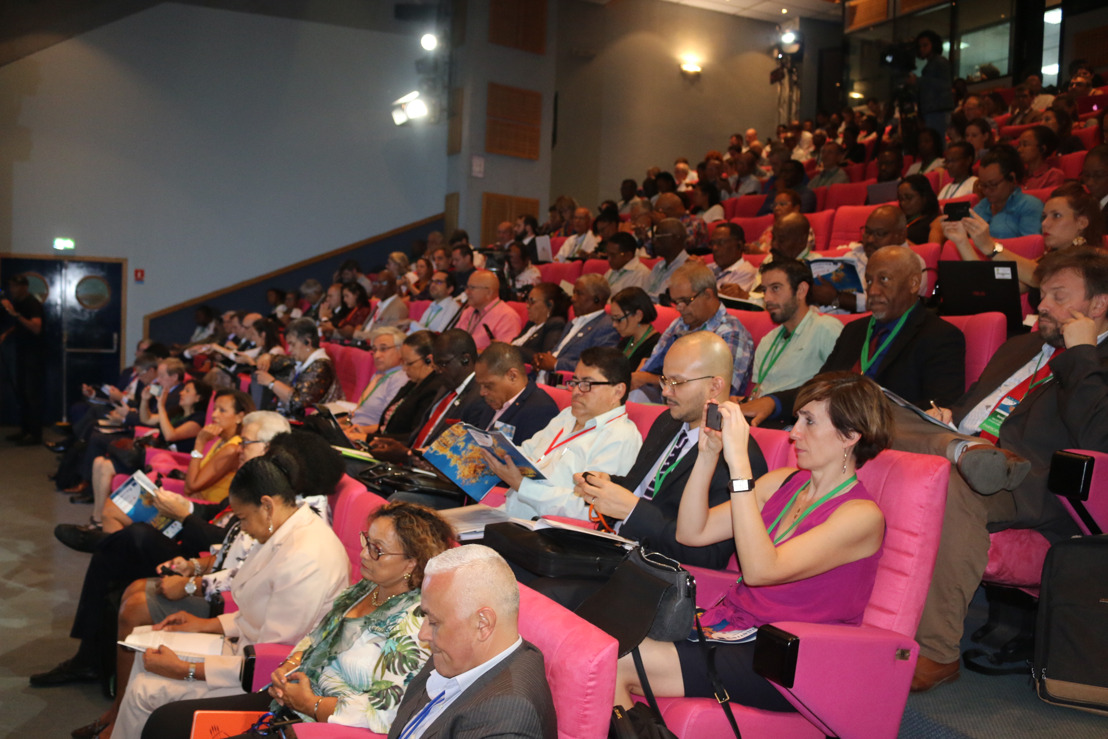 The International Conference on Sargassum has resulted from the commitment and support of the President of the Regional Council of Guadeloupe Ary Chalus, and the President of France Emmanuel Macron. This conference pursued three main objectives:

The International Conference on Sargassum was inaugurated by an exhibition showcased at the University of Antilles which was followed by official speeches, as well as the screening of two movies and a debate with the general public.

In his introductory speech, President of the Regional Council of Guadeloupe Ary Chalus highlighted the need to preserve the maritime heritage of the Caribbean islands which has a critical role for the economic development.

We continue to fight and provide assistance to communities impacted by the invasion of sargassum and businesses led to closure, so that they do not lose hope. Therefore, I was very pleased to host this International Conference on Sargassum which, I hope, will open a door of hope. We live in small islands, and this maritime heritage has contributed to our economic development and a quality of life envied around the world. Notwithstanding the exposure of our shoreline to the direct impacts of climate change, it would be a mistake to consider our insularity as a handicap. Because of their geographical position, countries and territories of the Caribbean must spearhead the environmental responsibility. President of the Regional Council of Guadeloupe Ary Chalus explained.

Secretary General of the ACS June Soomer reminded that the issue of sargassum remains a priority for the entire Caribbean.

We must address this challenge, especially as many countries and territories have been mobilising important funds to try to control this phenomenon. We have been talking about it since 2011. I was very pleased because we discussed solutions, opportunities and innovations in this area. In addition, we spoke as one for the first time by making a major regional political statement which, I hope, will have an international impact. Secretary General of the ACS June Soomer stated.

OECS Head of the Environmental Sustainability Cluster, Chamberlain Emmanuel, drew the attention of the participants on the impacts of sargassum in the OECS Member States through the screening of a movie which highlighted the difficulties faced by the governments. He also reminded the commitment of the OECS to address the issue.

In July 2018, the 5th Meeting of the OECS Council of Ministers for Environmental Sustainability held in Montserrat considered “Sargassum: Challenges and Opportunities” as a priority, and issued a statement and made related decisions. The very large delegation of Ministers present in Guadeloupe was a testimonial of the permanent commitment to address this issue and demonstrated that this International Conference on Sargassum is totally in line with our vision. This event was a hub for exploring concrete solutions and building resilience to the invasion of sargassum.

Further to the introductory speeches, the movie "Brown Seaweed, Green Ideas" was released to the public. This movie which was produced by Frédéric Tyrode Saint-Louis in partnership with the students of the high-school of Port-Louis in Guadeloupe, aimed to showcase the harmful effects of the massive arrival of sargassum on the environment and the health of the inhabitants of the communities impacted in Guadeloupe. The film also featured the initiatives to use the seaweed as a resource and manufacture agricultural products or generate green energy.

Besides the conferences, 55 institutional and private exhibitors also presented innovations on the detection, analysis, collection, management and recovery of sargassum at SARG'EXPO.

In addition, the International Conference on Sargassum was instrumental in launching the INTERREG SARG'COOP project. This ambitious cooperation project is financed by the European funds through INTERREG CARAÏBES.

INTERREG SARG'COOP gathers together multiple partners including the collectivities of French Guiana, Martinique, Saint-Barthelemy and Saint-Martin, the French Government through the Ministry of French Overseas Territories, and the Ministry of Ecological and Solidarity Transition and Higher Education, Research and Development and Innovation, the OECS, the ACS, Dominican Republic, Mexico, the Agency for Environment and Energy Management (ADEME), the French Development Agency (AFD), the French Agency for Biodiversity (AFB), the National Agency for Research (ANR) and the University of the Antilles.

This project aims to strengthen the preparedness and resilience of the countries and territories of the Caribbean to the invasion of Sargassum. It will lead to the creation of a center for observation, monitoring and warning of sargassum, as well as the development of a multidisciplinary network of professionals.

Finally, the international conference on Sargassum ended with a Summit of Heads of Governments of multiple countries in which a final declaration was signed to reflect their commitment to provide concrete and lasting responses to the invasion of sargassum.