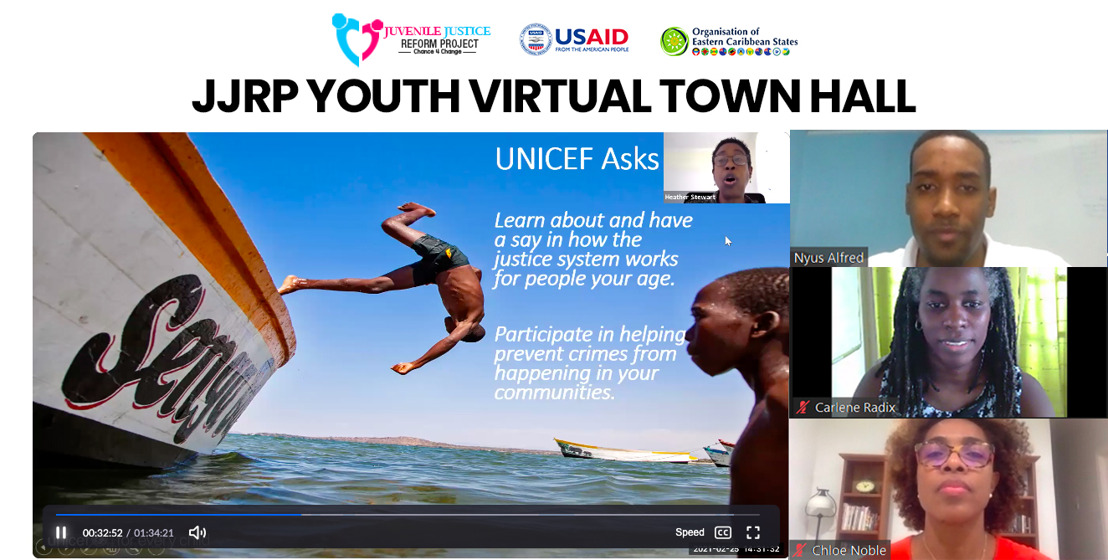 In addition to the USAID and Organisation of Eastern Caribbean States (OECS) speakers, representatives from JJRP, UNICEF, and Grand Bacolet Rehabilitation and Treatment Centre in Grenada presented on several issues including:

Chloe Noble, General Development Specialist, USAID Eastern and Southern Caribbean, who delivered remarks during the event, commended the JJRP for positively engaging the region’s youth in juvenile justice reform. She also thanked the youth and youth groups for attending the town hall and seizing the opportunity to learn more about Juvenile Justice in the Eastern Caribbean. She added,

“All of you gathered here today will be an important part of making sure that long-term, coordinated support for youth in the justice systems occurs. This Town Hall is one additional step in involving youth in this work.”

Dr. Carlene Radix, OECS Head of Human and Social Division, reflecting on her involvement in the event shared:

“The Youth Virtual Town was an important avenue to engage the youth in the region, to share information and generate dialogue and understanding of the key issues. We were pleased to have 58 people attending this virtual workshop with representation from youth and youth groups from all six OECS Member States. The discussion was relevant and insightful, with youth seeking real and practical strategies to support their peers who end up in conflict with the law.”

One of the attendees of the Youth Virtual Town Hall, Raejean Montoute, CARICOM Youth Ambassador for Saint Lucia, and President of the Gros Islet North Youth and Sports Council spoke of the benefits of the Town Hall.

”It was very informative to hear the various speakers highlighting the different elements of Juvenile Justice Reform as it helps us to better understand the key issues. I am looking forward to seeing more coming out of the Juvenile Justice Reform Project to assist us youth groups, as we seek to support child justice reform and troubled youth in our communities.”

The Juvenile Justice Reform Project (JJRP) Phase II, funded by the United States Agency for International Development (USAID), and being implemented by the OECS Commission, deals specifically with children in conflict with the law and the provision of diversion, rehabilitation and reintegration mechanisms for assisting children in the six (6) OECS independent Member States of Antigua and Barbuda, the Commonwealth of Dominica, Grenada, St Kitts and Nevis, Saint Lucia and Saint Vincent and the Grenadines Over the four years of JJRP Phase II, some key achievements include: