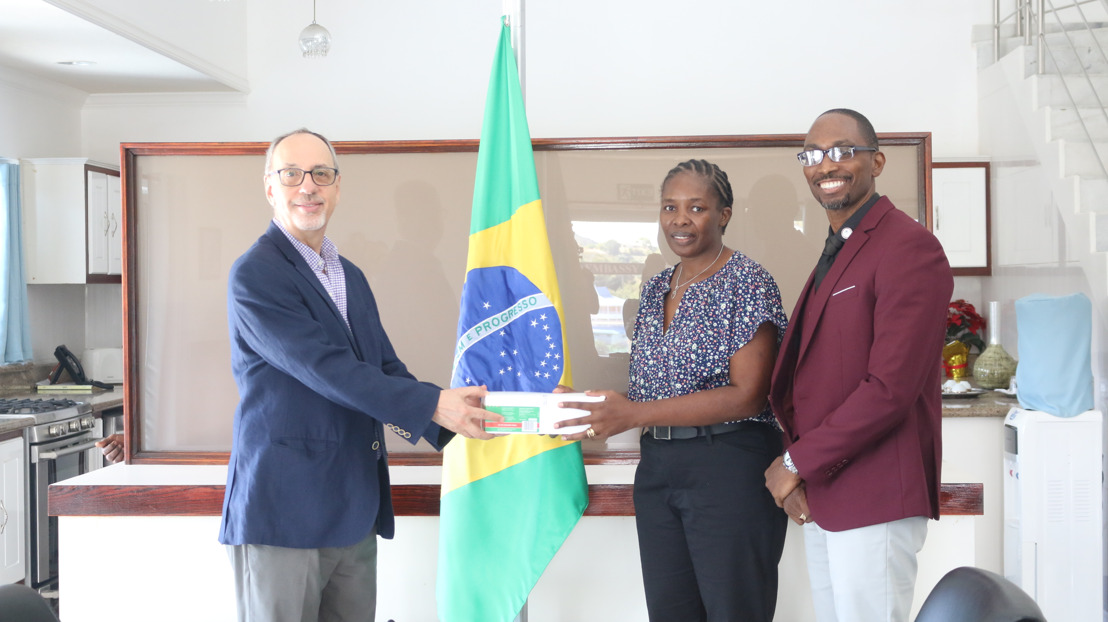 The stock of Oseltamivir capsules (Tamiflu®) was donated by the Government of Brazil on January 12th, 2022 at the Embassy of Brazil in Rodney Bay, Saint Lucia. The handover was made by Brazilian Ambassador H.E. Mr. Anuar Nahes to two official representatives of the OECS in attendance, namely Head of the OECS Pool Procurement Services Roselyne Opel, and Senior Technical Specialist at the OECS Pharmaceutical Procurement Service Mr. Abraham S. Weekes.

The 50,000 tablets will be donated to the Ministry of Health of the Commonwealth of Dominica in time for the Influenza Season, which usually starts in fall (September-December) and ends in Spring (March-June).

Handling symbolically a sample of the 50,000 tablets of Oseltamivir to be forwarded to the Commonwealth of Dominica, Ambassador Nahes stated:

“I express hereby my satisfaction with this new opportunity to strengthen the ties of humanitarian cooperation between Brazil and the OECS, and reiterate the availability of my country to explore further collaboration opportunities in the area of health”.

"For the past three decades, flu activity has peaked at some point between the months of October and February but tapers off by April which is why this donation is very timely. Persons who suffer from the flu are prone to serious complications if they contract the COVID-19 virus. The combination of both diseases that has been observed recently is now being referred to as "flurona". Tamiflu®, has been used fairly regularly and has proven to reduce the duration of the Flu when being used at the first signs of symptoms of the Flu."

Further to this collaboration, the Government of Brazil and the OECS have deepened cooperation in key development areas including agriculture. For example, agricultural stakeholders of Saint Vincent and the Grenadines benefited from the support of the Brazilian government through the donation of seeds as part of the recovery efforts after the eruption of the La Soufrière Volcano in April 2021.