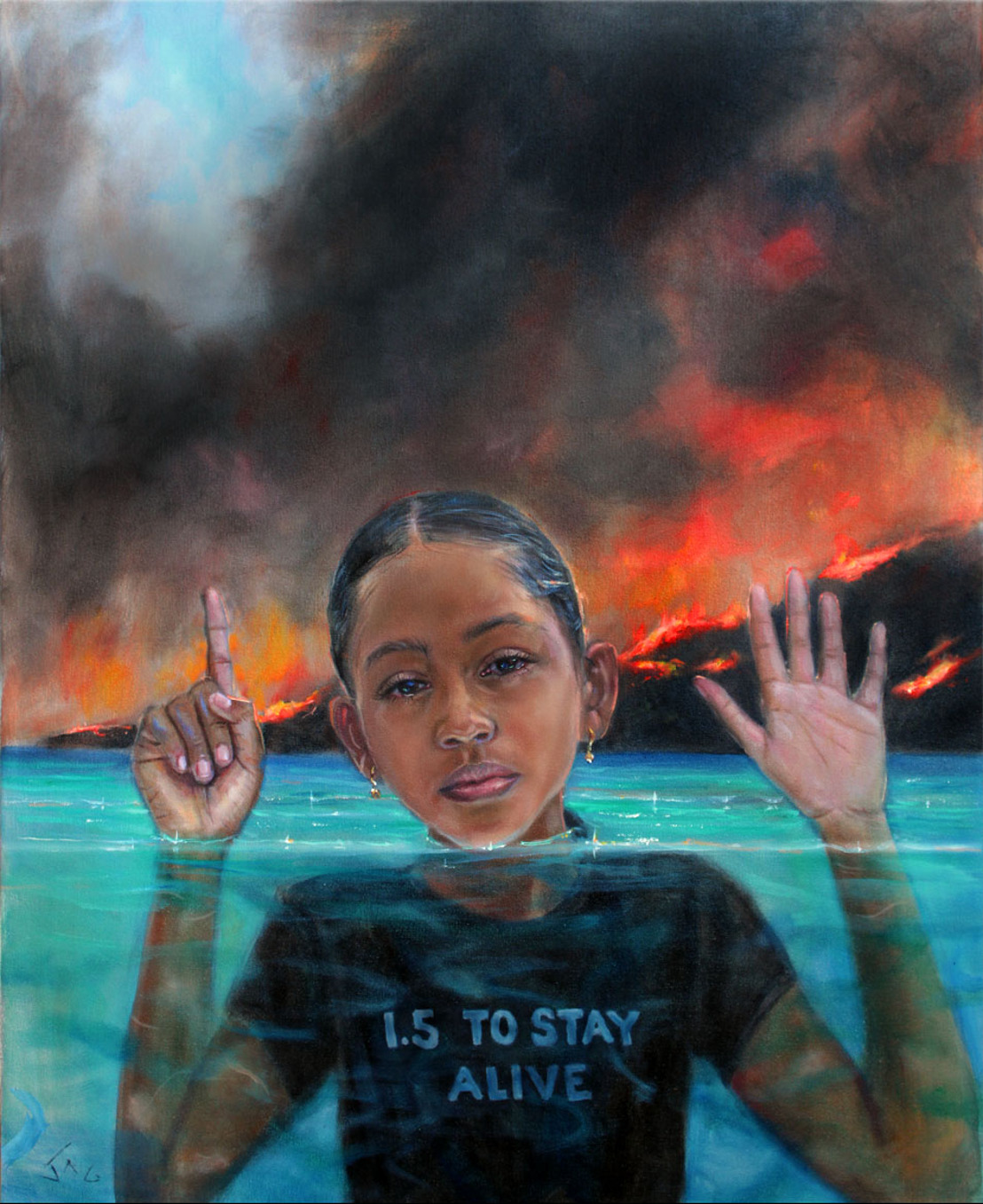 “Jonathan Gladding's first 1.5 To Stay Alive painting became the iconic poster that symbolised our fight in Paris in December 2015 to negotiate a strong, ambitious Paris Agreement,” said Dr. James Fletcher of Saint Lucia, one of the key figures in the negotiation of that Agreement 6 years ago.

“This recent painting lets us know that our situation is grim - our sea levels are continuing to rise, while on land we are burning up. However, amidst the dark clouds of forest fires and severe hurricanes, there is still a promise of blue skies, brighter days, if we take urgent action. Thank you, Jonathan, for another priceless contribution to our fight against the existential threat of climate change.”

"The contrast between the two iconic images speaks viscerally to the grave deterioration of the climatic condition of the Earth and the exponentially greater dangers that urgently confront us."

The “1.5 To Stay Alive” campaign that was launched in July 2015, at the initiative of the regional organisation Panos Caribbean, has been supported by a number of prominent Caribbean artists.

“Musicians, painters, poets, all artists play a lead role in the fight for social justice because people trust them and because they speak in a language that everyone understands,” said Yves Renard, Regional Coordinator of Panos Caribbean.

Indeed, over the past few years, in addition to its collaboration with Jonathan Gladding, Panos Caribbean has worked with several other artists, notably poet and playwright Kendel Hippolyte who wrote the lyrics of two powerful songs, which were produced and performed with prominent Caribbean musicians, including David Rudder, Ronald Boo Hinkson, Taj Weekes, E.sy Kennega, Belo, Zara McFarlane, Banky Banx and Bushman.

When asked about his inspiration for this new painting, Gladding said:

“I was inspired by the increasing number of catastrophes already bearing down on us on all fronts. Everyone is being affected. Glacial melting and sea level rise, the severity and frequency of weather events, and the relentless droughts and wildfires going on all over the planet. The Australian bushfires and the Brazilian Amazon rainforest wildfires of 2020 were especially shocking and heart-breaking, and this year we have seen the terrible fires in California as well as Greece and other parts of Europe.”

“So, the girl in the painting represents earth and humanity in peril,” Gladding explains. “Slowly being submerged by rising sea levels, while at the same time she is surrounded by the wildfires of a burning planet. Her (our) only hope is that we do all we can to keep the increase in average global temperature to no more than 1.5°C above preindustrial levels. Reducing our use of fossil fuels and investing in clean energy, consuming less, wasting less, eating less meat, growing our own foods and buying locally when possible, adopting greener methods of commuting, and pressuring our governments to take bold action on climate change. That’s what she’s asking us to do.”

The first goal of COP 26 is straightforward: it is to “Secure global net zero by mid-century and keep 1.5 degrees within reach.” If the global summit fails to achieve that goal, it will betray the hopes of the girl on Jonathan Gladding’s inspiring image, and the hopes and rights of all future generations, especially in the regions, countries and communities most directly affected by climate change.