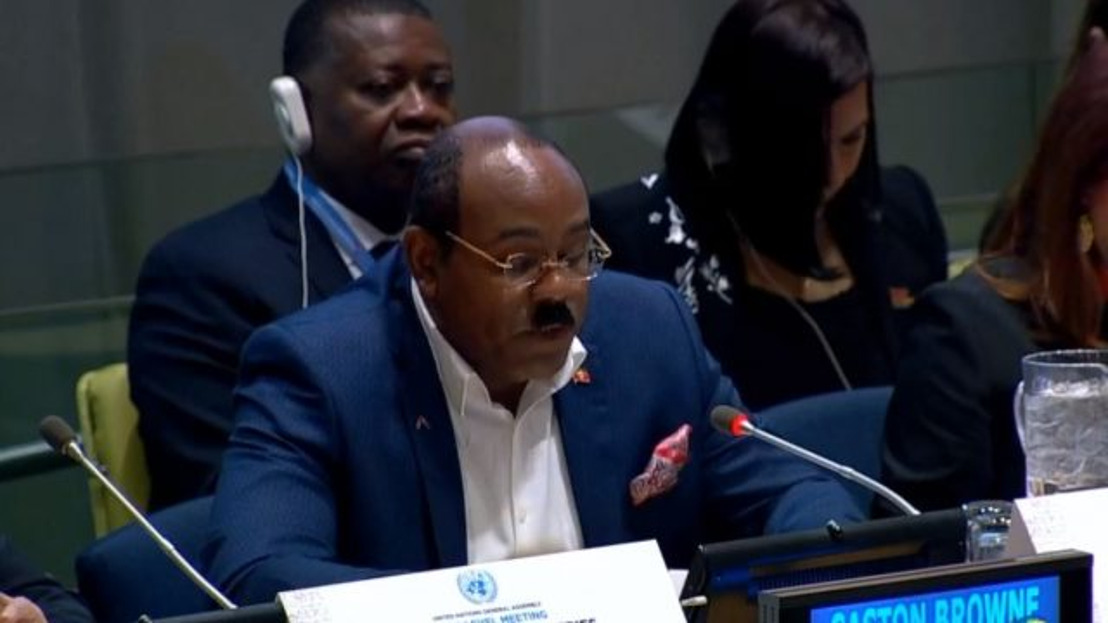 I have the honour to speak on behalf of the fourteen Member States of the Caribbean Community (CARICOM) at this inaugural High-Level Meeting on Middle Income Countries at the United Nations. We align our intervention with those to be made by Egypt on behalf of G77 and China and Maldives on behalf of the Alliance of Small Island States (AOSIS).

Pursuant to the adoption of resolution 70/1 of 25 September 2015, entitled “Transforming our world: the 2030 Agenda for Sustainable Development”, CARICOM joined the international community in committing to achieve a comprehensive, far-reaching and people-centred set of transformative Sustainable Goals and targets to achieve the same by 2030. The goal being, the eradication of poverty in all its forms and manifestations, including extreme poverty.

The question arises therefore, as to whether middle-income countries are on pace to attain these benchmarks. A sobering review of the situation in middle income countries does not yield an affirmative conclusion. Hence, we commend the impetus of the Office of the President of the General Assembly to convene a high-level meeting to discuss the gaps and challenges of middle-income countries in the implementation of the 2030 Agenda for Sustainable Development in pursuance of General Assembly Resolution 72/230.

We argue that to be designated as high middle-income or middle-income countries and to be placed in the same category as emerging economies, while ignoring the many challenges CARICOM states face, is of concern to all of CARICOM.

Excellencies, whereas graduation is usually a cause for celebration, country graduation in this context is a cause for much alarm. Nothing positive happens to a country when it crosses that arbitrary, imaginary line of per capita income. Its ability to sustain development is now in peril and it seeks the help that was once available.

According to World Bank categorizations, 109 countries are categorized as middle-income countries accounting for seventy per cent of the world’s population. This grouping is not homogenous in character as there are varying levels of inequality, rates of poverty and economic performance, range of natural resources, productivity and innovation, competitiveness and quality of infrastructure.

One issue of commonality however, that CARICOM can attest to, is the inadequate access to concessionary financing and official development assistance. International financial institutions seem to only focus on the perceived per capita income as a determinant of a country’s level of development whilst not taking into consideration the myriad of challenges that middle-income countries encounter. Some of these include:

Developed partners and OECD countries continue to promote the notion of graduation, because not only do they use crossing that imaginary line as a marker for graduation, but it is the only methodology for ending aid and development assistance. It would therefore appear that graduation, works in favor of donor countries.

The CARICOM Member States are mindful of the priorities of your Presidency, CARICOM attaches great importance to these.

Accordingly, we are hopeful that action-oriented and time sensitive recommendations emanate from today’s High-Level Meeting on Middle Income Countries as global attention to the needs and challenges of middle-income countries can no longer be prolonged or delayed.

In this connection we call for priority consideration and action to the following recommendations:

1) Established timelines from the International Financial Institutions for the recognition of an alternative criterion to the Gross Domestic Product as an assessment of a country’s level of development and a country’s eligibility for concessionary financing. Essentially the acceleration of momentum towards the acceptance of a vulnerability index and poverty index is imperative. We look forward to more direct consultation with the international financial institutions and other entities undergoing these reviews. We also call on enhanced support from the G8 and G20 membership to achieve this end.

2) Climate Finance initiatives must be a central component of programming for middle income countries as natural phenomena occurrences are a certainty. More technical capacity assistance is needed in the creation of innovative instruments such as green bonds, blue bonds and catastrophe bonds. CARICOM notes with appreciation, ECLAC’s Debt for Climate Swap Initiative and encourages the expansion of this initiative to address the varying unique structures of debt in CARICOM economies.

3) The facilitation of a review of the high indebtedness levels of Caribbean territories and sources of debt with a view to negotiating more amenable long-term solutions;

4) CARICOM supports the continuation and expansion of the remit of mechanisms to assess the resilience of middle-income countries including the UNECLAC Loss and Damage Methodology and Structural Gaps Methodology as well as the Resilience Profile Studies of the World Bank;

5) The evaluation of UN Programming throughout the UN development system to ensure that there is greater efficiency, effectiveness and accountabilities in which the United Nations is engaged with middle income countries and the reform of the United Nations. CARICOM is of the view that the aim to ‘leave no-one behind’ and the fostering of resilience building must be a fundamental component of all UN programming. CARICOM reiterates its call for the provision of adequate resources to the departments of the United Nations tasked with implementing the 2030 Agenda for Sustainable Development and the Samoa Pathway Outcome;

6) Advocacy role of the United Nations as the interlocutor between middle income countries and international financial institutions and the wider donor community. CARICOM expresses its profound appreciation for the institutional and technical support received from the United Nations Development Programme, United Nations Commission for Latin America and the Caribbean, UN DESA and the Office for the High Representative for Landlocked, Least Developed and Small Island Developing States in pursuance of regional developmental processes;

8) The convening of technical workshops to identify country capacity development needs is welcomed. As this grouping is not homogenous, common but differentiated goals abound; and

9) Ongoing public-private sector dialogue in pursuance of Sustainable Goal 17- the establishment of reliable and durable partnerships is also to be welcomed. We acknowledge that the private sector has a very important role to play in the implementation of the 2030 Agenda for Sustainable Development and the Samoa Pathway. We also acknowledge the benefits to be accrued from the SIDS Partnership Framework and the SIDS Global Business Network.

The Caribbean Community anticipates that today’s deliberations will generate frank and forward-looking perspectives on the situation in middle income countries as well as provide a progressive roadmap on the way forward for addressing the challenges and needs of middle-income countries.

The Region will remain active in preparations for the high-level events of 2019 namely, the High-Level Political Forum on Sustainable Development, the Secretary-General’s Event on Climate Change and the High-Level Mid-Term Review of the SIDS Accelerated Modalities of Action (Samoa) Pathway.

We encourage the United Nations and the international community to continue to offer their support to middle income countries in the lead up to the events in 2019. South-South cooperation, North and triangular cooperation as well as genuine and durable partnerships will play a pivotal role in the identification and implementation of best practices for building resilience and capacity building for middle income countries.