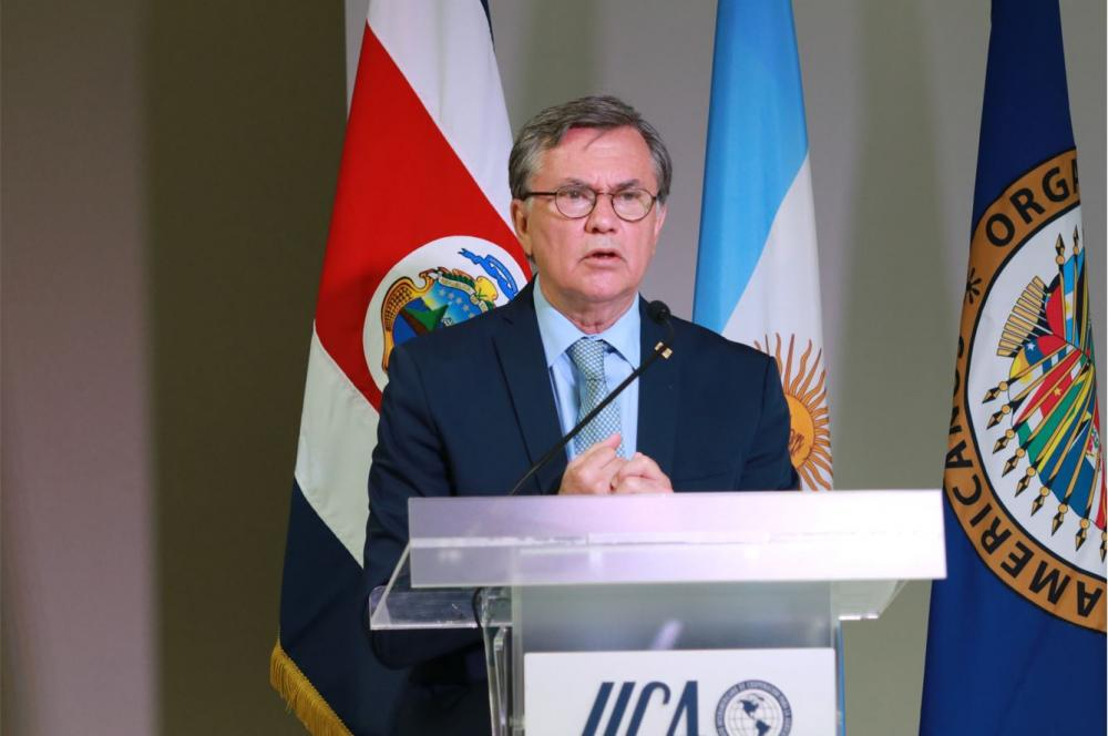 This is the veterinary surgeon’s second consecutive term as head of the specialist agency in agricultural development and rural well-being. The many officials representing all the countries of the Americas who were present to witness the ceremony made mention of Otero’s efforts to advance agrifood system sustainability in the hemisphere.

The ceremony was held at IICA Headquarters in San Jose, Costa Rica, with most of the officials attending virtually, given the health situation arising from the Covid-19 pandemic.

The ceremony was also witnessed by Ambassadors of IICA Member States in Costa Rica, heads of mission of international organizations with offices in that Central American country, private sector representatives, members of academic institutions and representatives from the international and national press.

IICA also used the ceremony as an opportunity to honor three outstanding women of the Americas for significant contributions to food production and rural well-being and the strengthening of the region’s agrifood systems: Maris Llorens, a Swiss-born Paraguayan livestock farmer and philanthropist; as well as scientists Raquel Chan and Gabriela Olmedo, from Argentina and Mexico, respectively.

After administering the oath of office to Otero, with his two young granddaughters, Catalina and Sofía, looking on, Minister Tereza Cristina remarked that,

“Otero’s tremendous coordination capacity served to advance critical issues for the Hemisphere’s agriculture sector. We hope that IICA will continue to support the countries in protecting agriculture and free and fair trade. Agriculture plays a pivotal role in generating income and employment and guaranteeing food and nutritional security. IICA is the Home of Agriculture in the Americas and we, the countries, are counting on you.”

MINISTERS REFLECT ON A MODERN INSTITUTION IN SERVICE TO THE COUNTRIES

Speaking from Argentina, Minister Julián Domínguez emphasized IICA’s leadership as a modern institution serving the countries of the Americas. omínguez, who also conveyed a special message to the Director General from Argentinian President, Alberto Fernández said,

“We don’t know what the post-pandemic era will be like, but we do know that the world will never be the same. We will have to rethink our agenda. Our production systems will only improve if we work together and Manuel is the right person to lead the charge.”

The OAS Secretary General highlighted IICA’s work to strengthen regional multilateralism, cooperation between countries and the search for solutions for the agriculture sector. Almagro stressed that,

“Agriculture is much more than an essential economic activity. It is also a means of earning a living and caring for the environment; it is education and food security. We must produce more and better, because this will serve as a springboard for our development. Otero has assumed this commitment with great efficacy. From a developmental perspective IICA will be a fundamental instrument for post Covid-19 recovery and in creating the better societies to which we all aspire”.

“Under his leadership, IICA fostered greater cooperation among Member States, ensuring the development of agriculture as a vital activity for food security, social peace, rural sustainability and respect for the human rights of farmers, which will enable us to create a better future.”

On the other hand, Minister Saboto Caesar emphasized that in recent years IICA has provided solutions for Saint Vincent and the Grenadines and other Caribbean island states, while expressing “confidence that it will continue to play a critical and necessary role in the advancement of our agricultural systems in the Hemisphere”.

Nicaragua’s minister, Edward Centeno, congratulated Otero and called for the establishment of an agriculture sector “that produces high-quality food that is accessible to all families, by way of fairer markets that adequately compensate those who make daily sacrifices to feed humanity”.

On behalf of the IICA Goodwill Ambassadors, the former President of the Dominican Republic, Hipólito Mejía, congratulated Otero and referred to the dramatic scenario facing Latin America and the Caribbean due to the increase in poverty and inequality generated by the pandemic. He stated,

“Agriculture is vital for food security, foreign exchange generation, exports and the conservation of the environment and natural resources. We need cooperation and solidarity in order to transform challenges into opportunities.”

“Manuel Otero’s administration has been characterized by efforts to align the various interests of the countries, which has enabled the region to participate and adopt a strong position in various international negotiation forums.”

Secretary Villalobos, who is also a Director Emeritus of IICA, expressed Mexico’s support for IICA’s efforts to guarantee the sustainability of agriculture in the Americas and highlighted current challenges:

“The world has not had an easy start to 2022, following two difficult years. However, those of us who form part of the agrifood sector are hopeful that the commitment and positive behavior that has been developing during this crisis will persist.”

AGRIFOOD SYSTEMS ARE KEY TO OVERCOMING THE IMPACT OF THE PANDEMIC

“As the pandemic continues, our economies will continue to face challenges, and we must therefore adapt. We must consolidate the progress achieved over the past four years and focus on social development projects.”

From Honduras, Secretary Guevara noted that the IICA team had provided the Central American country’s agrifood sector with considerable assistance to overcome difficult situations, such as those triggered by violent hurricanes.

In turn, Costa Rican Minister Alvarado praised Otero, describing him as “a person committed to agriculture and to the men and women in the countryside who work day to day to provide us with food”.

“We must guarantee the food security of our population and ensure a fair price for the efforts made by farmers, so that they don’t fall victim to the different means of commercialization. It is time to turn our gaze towards producers, to ensure their well-being and dignified existence.”

In his inauguration speech, Otero expressed his excitement at assuming a new four-year term at the helm of an institution like IICA, which is now looking towards the future. He said,

“From that first day, and with the clear leadership of the member countries of IICA, we have sought to ensure that agriculture and rural areas are regarded as strategic assets of the countries of the Americas, a region that has tremendous potential to contribute to resolving the regional and global crises that affect all of us."

The Director General reviewed the transformation process launched during his first term, which he will now seek to consolidate.

Among the noteworthy changes, he highlighted the optimization of financial resources, the creation of a knowledge management platform that assesses and amplifies technical cooperation actions, the increase in the number of strategic partnerships established, and the launch of a virtual campus through which the Institute strengthens the capacities of the human resources who will transform the region’s agrifood systems.

Otero thanked the ministers of Agriculture for their “inspiring” support, which he considered particularly necessary within the context of the pandemic, which has generated more poverty and insecurity, especially in the most vulnerable sectors. “The only way out”, he said, “is to recognize the fact that our agrifood systems play a key, strategic role in driving sustainable processes for the generation of employment, progress and social peace”.

Among the milestones achieved, Otero highlighted a document containing 16 messages on the transformation of agriculture, agreed upon by countries of the Americas through coordinated work with IICA, ahead of the UN Food Systems Summit held last September.

The document expresses the view that, without agricultural production, there would be no raw material to transform into food, and that agriculture is a fundamental activity in eradicating poverty, driving rural development and protecting the natural environment.

“The document reaffirms our commitment to working tirelessly to consolidate IICA’s standing as the region’s great technical cooperation institution that looks outward to the world, making available to the ministries of Agriculture a portfolio of impactful projects.”

For this reason, he announced the launch of a Public Policy Observatory for the Transformation of Agrifood Systems, which will be coordinated by IICA, together with a network of universities and international agencies committed to this issue.

Lastly, the Director General of IICA underscored the continent’s opportunities and responsibility in these times of crisis and global uncertainty.

“I express my firm conviction that the Americas is called upon to guarantee our planet’s food, nutritional and environmental security. Only with our participation and commitment will we succeed in achieving this global objective.”