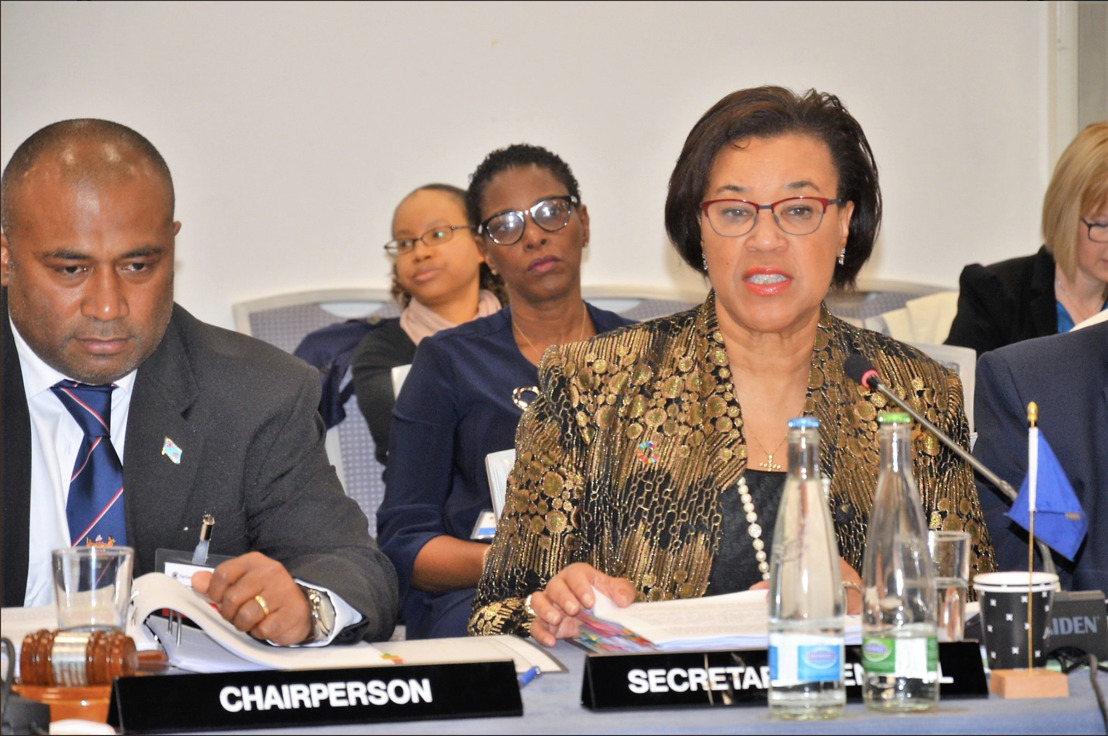 The theme of the meeting, “Universal Health Coverage: Reaching the unreached, ensuring no one is left behind”, emphasised the importance of UHC as a means of securing a more sustainable future for Commonwealth citizens.

This entailed the inclusion of women, young people, adolescents and other vulnerable populations, such as those with mental health challenges or disabilities, not only as recipients of health services, but also as sources of innovative solutions and equal partners in service delivery.

The objectives of the Commonwealth Health Ministers Meeting were:

(A) Commonwealth Health Ministers held their 31st Meeting in Geneva, Switzerland, on the eve of the 72nd World Health Assembly. The theme of the meeting was “Universal Health Coverage: Reaching the Unreached, ensuring no one is left behind”.

(B) Commonwealth Health Ministers, emphasising the global commitment to ensure that no one is left behind

(C) Commonwealth Health Ministers therefore acknowledged the continued need for collaboration and innovation, to leverage the convening power of the Commonwealth to accelerate progress towards universal health coverage in the context of primary health care to include the whole population and increase the range of services covered, so that previously unreached groups can also be included, without financial hardship to the individual and so that

(D) Commonwealth Health Ministers recalled the policy options they considered at their 2018 meeting, and recognised progress on agreed actions, particularly achievements, experiences and lessons such as

(F) Appreciating the role played by the Commonwealth Advisory Committee on Health (CACH), Ministers agreed with recommendations from the Committee, particularly the focus on supporting progress towards UHC, and noted the importance of the Committee’s involvement in advising on the Secretariat’s work programme. Ministers commended the work of the Secretariat, particularly noting the emphasis on practical tools to assist member countries, such as the UHC Financing Toolkit, price-sharing database and planned scorecard to track and monitor gender-based violence across the Commonwealth and decided that such efforts to support member states, relevant to their needs should continue. The recommendation to strengthen the human and financial capacity of the Secretariat to ensure sustainable financing of the Commonwealth Secretariat, was noted.

(G) Affirming the reports from the Civil Society Policy Forum and Commonwealth Youth Health Network, Ministers acknowledged that strategies that allow inclusivity will result in improvements in health system equity and that UHC financing needs to take into account the needs of those people who are hardest to reach, and to ensure no-one is left behind. Ministers also noted the work undertaken by the Commonwealth Youth Health Network in empowering young people to advocate for youth-friendly health services and welcomed the wide-range of innovations spearheaded by young people across the Commonwealth. Ministers also recognised the importance of strategic partnership and welcomed those established with development partners, civil society and other stakeholders, including beyond the health sector, to further the delivery of the health programme. Ministers also welcomed the building and strengthening of cross-sectoral partnerships, plans and ideas to raise extra-budgetary funds from traditional and non-traditional sources.

(H) Ministers agreed to discuss at the 2020 CHMM the health commitments from the 2018 Commonwealth Heads of Government Meeting in London including the progress made on indicators related to the commitments.

(I) Ministers agreed that Strengthening Health Systems for achieving Universal Health Coverage through Sustainable Health Financing and Human Resources would be an appropriate theme for the 2020 Commonwealth Health Ministers Meeting.