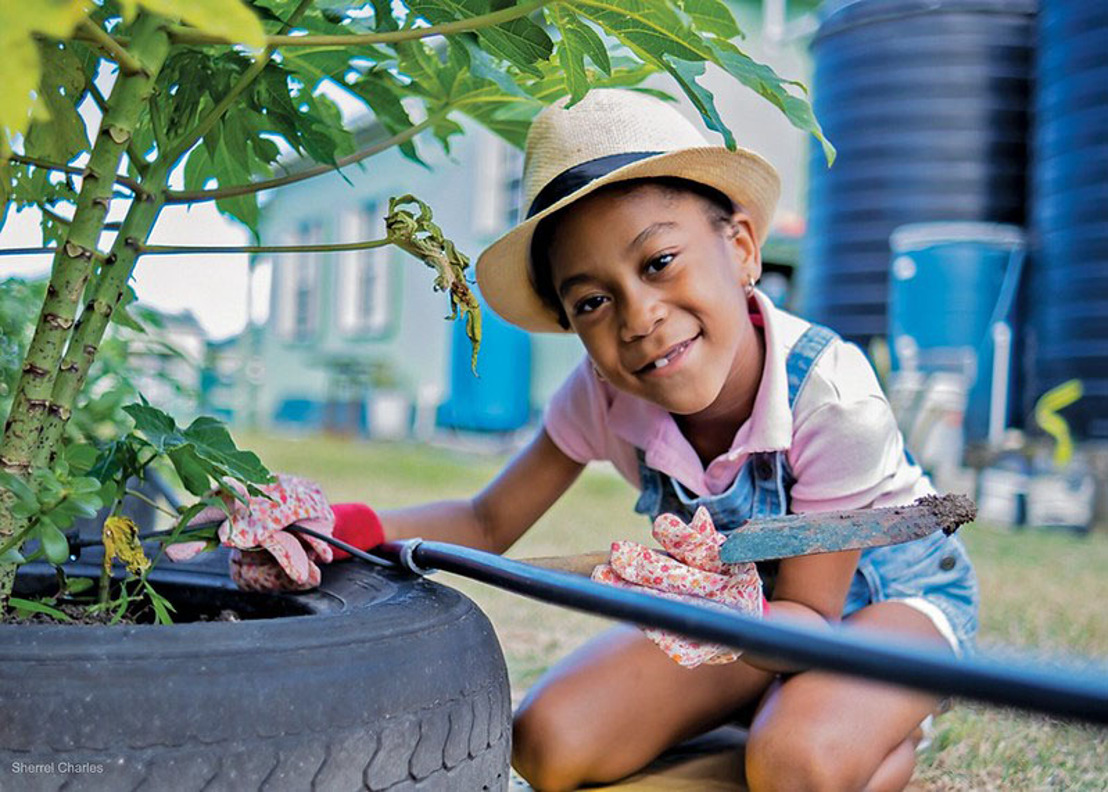 Ms Sherrel Charles of Antigua and Barbuda won the top competition prize and the ‘People Power’ category with her entry, ‘People Power in the Back Garden’. Her photo depicts a homegrown solution to Antigua and Barbuda’s prolonged droughts. In the picture, her young cousin uses a simple but effective drip irrigation system that the photographer’s parents rigged up for their kitchen garden.

“I believe the younger generation should be introduced to these concepts from an early age so that they know how serious climate change is and how important it is to manage resources properly,” Ms Charles said. The home-made drip irrigation system has reduced the impacts of climate change for her family.

Runner-up and winner of the ‘Nature-Based Solutions’ category is Ms Alexis Armande of Guadeloupe with her entry, ‘Mangrove Conservation in Guadeloupe.’ Her entry illustrates a project carried out by the municipality of Morne-à-l’Eau, which includes a wooden footbridge crossing the mangrove to Babin Beach. Thanks to this project, the ecosystem is preserved and offers many amenities to visitors - people can enjoy mud baths, picnics and peaceful walks in nature.

What is more, “the Eastern Caribbean is often exposed to climate hazards, and this conservation measure enables nature to regenerate faster,” Ms Armande said. “The nature-based solution depicted here considerably reduces the impacts likely to be caused by humans and helps to raise awareness of the importance of nature conservation,” she added.

Runner-up and winner of the ‘Design and technology’ category is Ms Shanis Cato of St Vincent and the Grenadines with ‘Resilient Seafront in Georgetown’. Her photograph shows so-called ‘X-blocks’ in a newly-constructed sea wall, which are designed to absorb wave energy and reduce damage to the town.

“The sea wall is a relief for many of the townsfolk,” Ms Cato said. “It protects the community that has been subjected to many floods, especially during the hurricane season. The coastal defence project, completed in 2021, not only protects against severe wave action affecting infrastructure, but also protects many as the sea - despite its beautiful nature - has claimed many souls.”

Sherrel Charles, Alexis Armande and Shanis Cato all speak about the stories behind their pictures in a celebratory event broadcast here: https://youtu.be/Wl1wKWa-RPY

The organisations behind the competition are the Organisation of Eastern Caribbean States (OECS) Commission, the University of the West Indies, the Université des Antilles and the Agence Française de Développement (AFD) Adapt’Action programme.

The competition is part of a larger initiative by these partners to increase awareness, understanding and skill for strengthening adaptation to climate change in Eastern Caribbean cities.

“It’s been amazing to see people’s motivation and imagination as they have shared their stories of resilience through this competition. People are showing how they’re finding enjoyment in nature, food and water security, and protection from natural hazards in some of the adaptation solutions shown in the photos. The competition shows that there is a lot of energy among citizens of the Eastern Caribbean for the climate change adaptation agenda. I trust this energy will grow and grow to meet our shared challenge.”

“Throughout its work in the Eastern Caribbean countries, AdaptAction showed that these territories share many climate vulnerabilities and risks. Their impacts on cities have become increasingly clear. The projected increase in the number and intensity of extreme weather events, together with the lack of resilience and socio-economic fragility of urban centres in Latin America and the Caribbean region, exacerbates the risk of floods, landslides, droughts and other natural disasters. Climate change therefore poses a profound challenge to built environments. This photo competition was a way for our organizations to show that art can be an efficient way to raise awareness about the needs for adaptation to climate change.”

The project, Building climate-resilient cities in the Eastern Caribbean, seeks to equip today’s and tomorrow’s urban planners and practitioners with the tools, expertise and critical thinking skills to transform Eastern Caribbean cities into places that are socially just and resilient to climate hazards. The project is doing this by developing a new, tailored educational curriculum for urban planning students and professionals in the region. This has the potential to transform the way Eastern Caribbean cities adapt to climate change.

The project also seeks to raise broader public awareness of climate change and support for resilience measures by running this photo competition - which will engage and motivate citizens from across the Eastern Caribbean region.

About the sponsoring organisations

OECS Commission
The Organisation of Eastern Caribbean States (OECS) is an international organisation dedicated to economic harmonisation and integration, protection of human and legal rights, and the encouragement of good governance among independent and non-independent countries in the Eastern Caribbean comprising Antigua and Barbuda, Commonwealth of Dominica, Grenada, Montserrat, St. Kitts and Nevis, Saint Lucia, St. Vincent and the Grenadines, British Virgin Islands, Anguilla, Martinique and Guadeloupe.  See www.oecs.org

University of the West Indies
Starting as a university college of London in Jamaica with 33 medical students in 1948, The UWI has evolved into a modern, future-driven, activist, top-ranked academy with over 50,000 students. Our mission to advance learning, create knowledge and foster innovation for the positive transformation of the Caribbean is centred on producing critical thinkers and leaders who serve the needs of the 21st century society.  See www.uwi.edu

The University of the French West Indies is organised around services and cross-cutting competencies, and its two regional bases: Guadeloupe and Martinique. See www.univ-antilles.fr

AFD
Agence Française de Développement (AFD) implements France’s policy on international development and solidarity. Through its financing of NGOs and the public sector, as well as its research and publications, AFD supports and accelerates transitions towards a fairer, more resilient world. It also provides training in sustainable development (at AFD Campus) and other awareness-raising activities in France.

With our partners, we are building shared solutions with and for the people of the Global South. Our teams are at work on more than 4,000 projects in the field, in the French Overseas Departments and Territories, in 115 countries and in regions in crisis. We strive to protect global public goods – promoting a stable climate, biodiversity and peace, as well as gender equality, education and healthcare. In this way, we contribute to the commitment of France and the French people to achieve the Sustainable Development Goals (SDGs). Towards a world in common. See afd.fr/en

Adapt’Action
The €30 million Adapt'Action Programme supports 15 developing countries and regional organisations to help them meet the challenge of operationalising the Paris Agreement through the implementation of the adaptation dimensions of their climate commitments (NDCs).

The objective of this programme is to provide the most vulnerable countries (Africa, Least Developed Countries and Small Island Developing States) with the means to develop sound investment projects in the field of climate change adaptation that can be financed by development finance partners, including AFD. See www.afd.fr/adaptaction