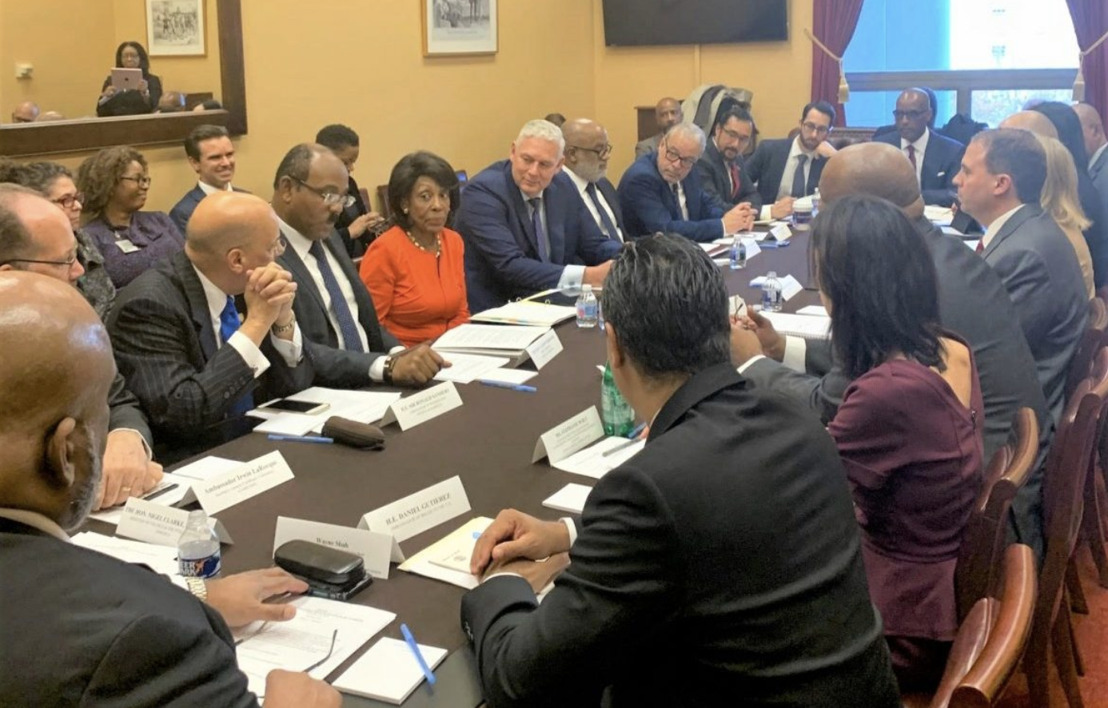 The Roundtable was first proposed by Antigua and Barbuda’s Prime Minister, Hon. Gaston Browne, at last July’s meeting of CARICOM Heads of Government. Since then, Antigua and Barbuda’s Ambassador to the U.S., Sir Ronald Sanders, worked with Congresswoman, Maxine Waters, as Chair of the Committee on Financial Services of the U.S. House of Representatives to make it a reality.

Senior Bankers from six major U.S. Banks and U.S. Congress persons gathered with a delegation representing CARICOM at Capitol Hill in Washington, under the Chairmanship of Congresswoman Waters.

The CARICOM team was led by Antigua and Barbuda's Prime Minister who is the lead Head of Government on Financial matters.

Browne told the meeting that the Caribbean and the U.S. have “a mutuality of interests” which necessitated each side displaying active concern about the well-being of the other, including security.

In this regard, the Prime Minister argued that the process of de-risking, which has led to a withdrawal of relations by some U.S. banks from Caribbean banks, poses a serious threat to the region’s welfare, including its capacity to import goods from the U.S., which totalled over US$13 billion last year, and is set to exceed this figure this year.

Representatives of the U.S. banks indicated that they recognise that value of CBRs, not only in financial terms but in the critical role it plays in global trade, investment, and other financial services.  They expressed a keen interest in overcoming the challenges posed by a regulatory environment in which banks are conscious, in their decision-making, of the severe penalties for incidents of money laundering and terrorism financing.  The banks made a number of helpful proposals for how this issue could be addressed.

In response, Prime Minister Browne pointed out that over the last 10 years, US$26 billion has been imposed worldwide as fines for non-compliance with money laundering, but not one bank was located in the Caribbean.

U.S. legislators expressed alarm at the effect on the Caribbean of de-risking and the loss of CBRs from U.S. banks as well as the effect on U.S. national security if the situation worsens. The Roundtable reached joint conclusions that the problem has to be tackled urgently and at several levels. All participating groups at the meeting resolved to work on solutions that arose from the discussion.

Prime Minister Browne expressed “great satisfaction” with the outcome of the meeting and the obvious commitment of U.S. legislators and the U.S. banks to work with the Caribbean on solutions. The Prime Minister told the meeting that what is required is “to build trust and confidence between correspondent banks in the U.S. and respondent banks in the Caribbean in a transparent relationship”.

Congresswoman Waters declared that she and the U.S. House Committee on Financial Affairs will remain engaged in the matter and are willing to take actions that may be necessary to preserve the mutual interests of the U.S. and the Caribbean.

Caribbean governments were represented by the Prime Minister of Saint Lucia, Hon. Allen Chastanet; the Finance Minister of Jamaica, Nigel Clarke, the Attorney-General and Minister of Legal Affairs of Barbados, Dale Marshall; the National Security Minister of Trinidad and Tobago, Stuart Young; and the CARICOM Secretary-General Irwin LaRocque.