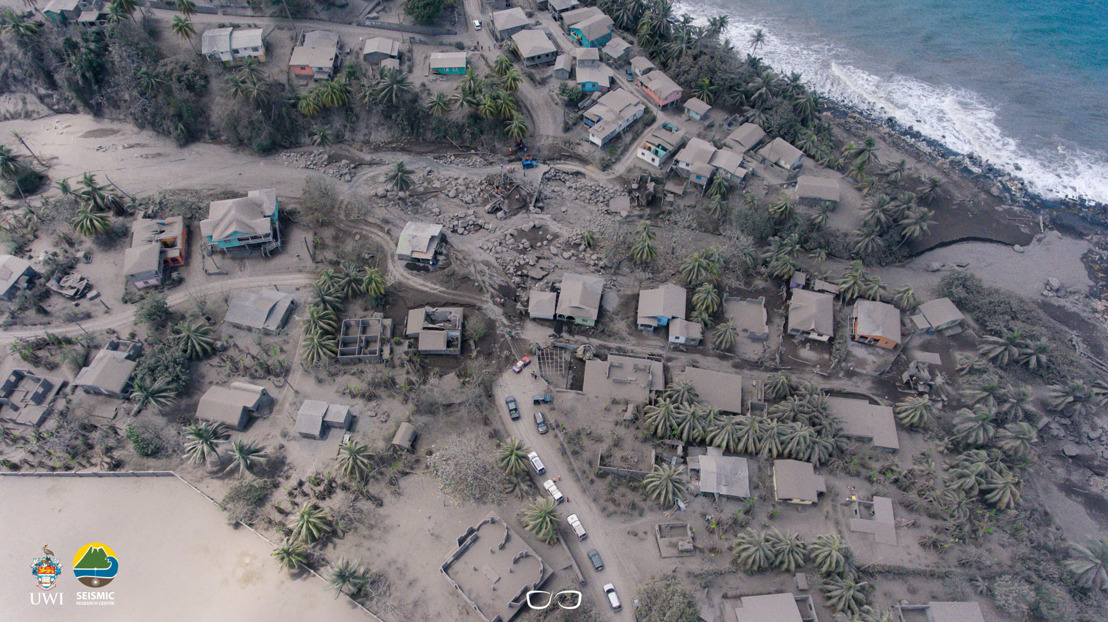 Mindful of the magnitude of the disaster, which has affected the daily livelihoods of an estimated one-fifth of the island’s population (approximately 20,000 persons), the Mission acted swiftly to engage the EU, other European States, and selected Missions in Brussels, with an urgent appeal for emergency humanitarian assistance.

The Mission’s appeal was well-received by the EU, which moved quickly to provide the Government and the people of St. Vincent and the Grenadines with a timely aid package through the EU aid agencies, namely the European Civil Protection and Humanitarian Aid Operations (ECHO) and its Emergency Response Coordination Centre (ERCC).

Given the gravity of the fast-changing situation on the ground in St Vincent and the Grenadines, ECHO-ERCC expedited the Mission’s request for assistance through an immediate appeal to the EU’s twenty-seven (27) Member States and six other European States.

This led to a commitment to provide the Government and the people of St. Vincent and the Grenadines with an emergency humanitarian aid package totaling Euro €740,000 to support the most pressing needs, including shelter, food and health needs. Furthermore, the European Union activated its Copernicus system – its emergency satellite mapping service to support visual and air quality assessments in, and around the La Soufriere Volcano.

It is expected that the EU aid package would be channeled through its traditional implementing partners.

The combined emergency humanitarian package would be made up of a Euro €500,000 allocation from the EU Acute Large Emergency Response Tool (ALERT), and an additional Euro €190,000 that would go towards the current Disaster Relief Emergency Fund (DREF) of the International Federation of the Red Cross and Crescent Societies (IFRC), which was established in 1985 to provide immediate financial support to National Red Cross and Red Crescent Societies.

The Head of the EU Mission in Barbados, Malgorzata Wasilewska stated:

“Our thoughts are with those who have been displaced, including those who have been left without clean water or electricity, due to the La Soufriere volcanic eruption. We announce this emergency funding that will support St. Vincent and the Grenadines in their efforts to overcome this disaster, in the context of the challenging COVID-19 pandemic, which will target in particular support to the evacuees, access to clean water and sanitation. The EU stands ready to step up humanitarian support for those in need in this crisis.”

The European Civil Protection and Humanitarian Aid Operations (ECHO) has been assisting people in need across the globe since 1992, through its annual budget allocation of approximately Euro €1.0 billion. It is responsible for responding to disasters or humanitarian emergencies in affected countries on behalf of the EU.

ECHO-ERCC assistance is provided in line with the following four principles grounded in International Humanitarian Law. The EU humanitarian aid:

The Government of France was the first European Member State to provide over 60 tonnes of much-needed humanitarian aid to the Government of St. Vincent and the Grenadines, the day after the first explosive eruption. Once again, showing that France is a true friend and partner to the Caribbean.

The Government of the Republic of Malta provided Euro €25,000.00 in emergency humanitarian aid that will be channeled through the WHO/PAHO to be used for the purchase of items that are urgently required given the humanitarian situation in St. Vincent and the Grenadines. This timely donation is consistent with the Government of the Republic of Malta’s policy of showing solidarity with other Small Island Developing States (SIDS).

Separately, the Government of Ireland recently responded favorably to an international appeal for assistance from the International Federation of the Red Cross and Crescent Societies (IFRC) with a generous donation of Euro €200,000.00.

Also, the Government of the Kingdom of Belgium moved swiftly to support the FAO’s interventions in St. Vincent and the Grenadines through a generous grant of US $100,000.00 to the FAO’s Anticipatory Action Window. This is a special fund for Emergency and Rehabilitation Actions, which allows the FAO to act quickly to disasters.

This grant will be used to mitigate the effects of the devastating eruptions on agriculture and other sectors. The overall aim of the grant is to strengthen livelihood resilience, and food security and nutrition of vulnerable rural households. It is expected that up to 400 livestock farming households and 2000 heads of livestock will benefit from this timely donation.

About the Embassies of the Eastern Caribbean States to the Kingdom of Belgium and Mission to the European Union:

The key focus of the ECS is to advance the political, economic and diplomatic interests of Member States that are jointly represented by the Embassy and Mission with a view to strengthening the relationship with the European Union (EU), its constituent States and institutions.