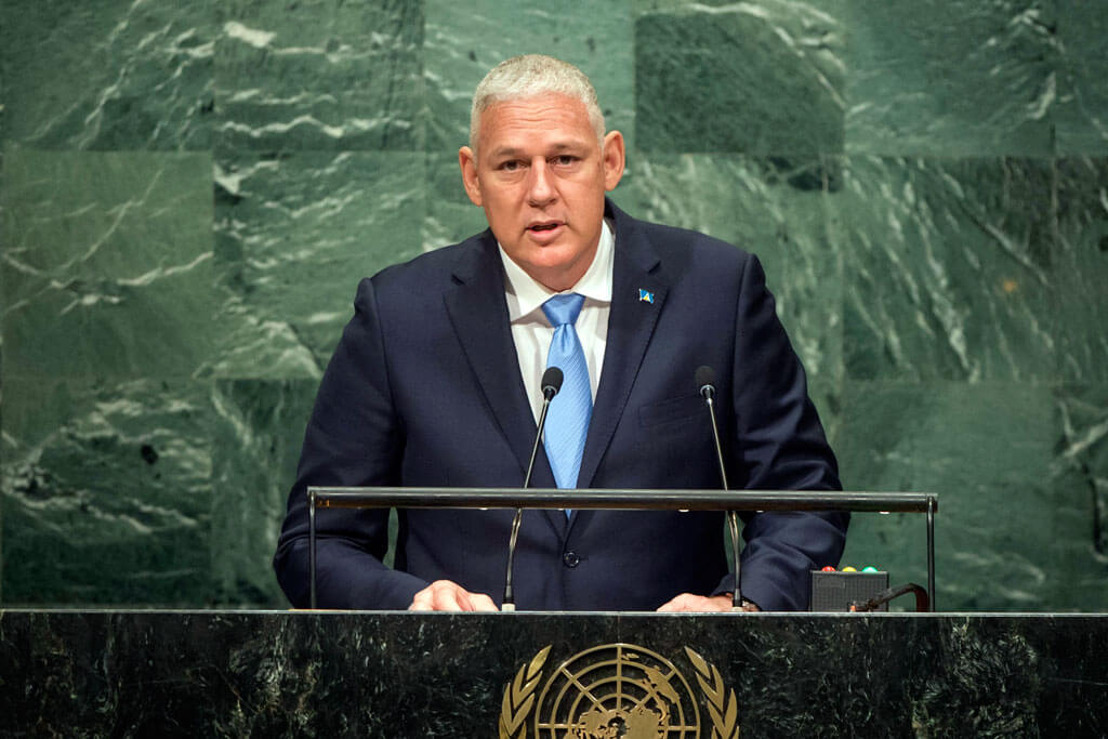 I am pleased on behalf of the Government and People of Saint Lucia to once again address this global community of nations. It was an honour for me, and for the Caribbean Community (CARICOM), to have had the Secretary General of this, our United Nations, António Guterres, join us in Saint Lucia this past July for our CARICOM Heads of Government meeting.

At that meeting the Secretary General acknowledged the challenges faced by Small Island Developing States especially that of climate change. Importantly he noted the other obstacles to sustainable development for countries like ours – notably the urgent and reliable access to development finance.

Mr. Secretary General, we thank you for your words of support and for your visit to our brothers and sisters in the Bahamas, noting first-hand how tenuous our grip on development can be in the face of climatic events. We are very encouraged by your commitment to support the advancement of the ECLAC debt for climate adaptation swap proposal for SIDS. This initiative will go a long way to not only free up domestic fiscal space, but it will also establish a resilience fund to finance adaptation projects. Saint Lucia looks forward to engaging with the international financial institutions and our partners to forge ahead toward implementation of this critical initiative.

We opened this high level week with a focus on climate change and climate action. Saint Lucia along with our fellow small island developing states continued to make a strong case for urgent action. The disturbing fact is that every September when we gather here, it is against the backdrop of yet another devastating extreme weather event.

Have we already forgotten what befell Dominica in 2017, when Hurricane Maria ravaged that island causing a loss of 226 percent of GDP?

Have we forgotten Barbuda, laid to waste by Irma? Or the British Virgin Islands and Anguilla?
I saw the devastation in the Bahamas first-hand, when I visited in my capacity as Chairman of the Caribbean Community. I saw the faces of people, absolutely lost and desperate, as they attempted to rationalize what had happened and what will happen next. They cried, they yelled, but ultimately, after the initial reflex empathy and emergency aid, they remain voiceless. We need to let them know by our actions that we hear them, we see them and we will not forget them.

Many of the victims of these devastating extreme weather events, have to focus on surviving one day to the next, they no longer have the luxury to anticipate and plan for the future; when they cannot contemplate where their next meal will come from. We should act with the same urgency as a mother searching for her lost child, we should act with the same desperation of a father who has seen the roof of his family’s home blown off. Let us recognize the awesome responsibility that has been placed on us, those of us in a position to give hope to the hopeless, and tangible assistance to those most in need.

To date, despite the overwhelming evidence, the tragic loss of lives and the destruction of people’s dignity, we have failed. We are failing as world leaders to act with urgency, instead allowing too often the denials of a few, to paper over the real and existential threat to the lives and livelihoods of so many. Where is the action to deploy with immediate effect, the resilient solutions; and the commitment to wrestle to the ground the fact that a heating planet is to blame – and the fact that we are the ones heating it.

For the few who stand with us and have provided tangible assistance as we fight for our survival, we are grateful for the support thus far. But I daresay that given the magnitude of the problem, we have only begun to scratch the surface.

Associated with our fight for survival, it is abundantly clear that the international financial architecture – the systems, mechanisms and rules that govern global finance – are moving too slow to pivot, to address this new normal for Small Island Developing States like mine. The inability and at times, unwillingness to change the status quo as it relates to graduating countries out of programs and creating new financing vehicles can no longer be tolerated.

While we face the reluctance of global financial institutions to heed our calls, we are left to attempt to develop our own solutions, and lean on new friends in our times of need. In fact, in the face of this new climate change reality, we are being forced to consider every and all options to ensure our survival and that of our people. One such step is the establishment of a special purpose vehicle dedicated to SIDS, through which we hope to mobilize financing for resilience. We truly hope that we will be able to interest member countries to join us in this very vital initiative. In that vein we applaud Norway and Germany who led the charge in renewing and doubling their contributions to the Green Climate Fund, and thank those who followed. The GCF however, will require an amendment to its policies to allow for the urgent and efficient approval of projects.

My island home of Saint Lucia is small, just 238 square miles with a population of under 200,000. We are however fortunate to be members of strong regional institutions.

Explore a little and you will note that as a sub-region, eight countries within the Eastern Caribbean, including Saint Lucia use what has become one of the most stable currencies in the world, the Eastern Caribbean dollar. We share a single court system, and we pool our resources in providing a large number of services for our people.

In our wider Caribbean community, we cooperate in even more areas: a University of international renown, our own development bank, a Common market, and a regional security mechanism, are but a few of our successes.

I highlight these achievements to signify that we are not a region of people who sit on our hands waiting to be rescued. In fact, as a region we have worked diligently post-independence, to establish the institutions and fashion the responses to deal with the challenges that confront us, and we have achieved much success in so doing.

Saint Lucia like all other nations of the world has a goal to chart a sustainable development path that benefits every last citizen, leaving no one behind. A goal to ensure that all are clothed, fed, and have a roof over their heads, with access to proper education, health and security – to provide these basics that lay the foundation that will promise a better future. Is that not the aspiration that we leaders all have for our people? Yet in the face of our ambitious sustainable development goals, we SIDS continue to have to battle with insurmountable challenges, many as a result of rules and systems that do not create the mechanisms and the requisite urgency to address our unique challenges.

Some of these rules impose restrictions on states, in the absence of credible evidence to support claims of wrongdoing. Our islands are being blacklisted, a demeaning and unfair practice that results in some instances, to effect irreversible damage to our reputations. So for countries like Saint Lucia which has the ambition to be self-sufficient and aid free, we are precluded from participating in the financial services sector; an area in which we have a comparative advantage.

Our Government believes that every single person matters, every person has a contribution to make. However to genuinely say they matter, we must give them the ability to be able to participate. If we are constantly moving from one crisis to another, our people are not going to be able to participate in the necessary changes. For the last three years Saint Lucia has been focused on trying to take control of our destiny.

One such way is our new partnership with the World Economic Forum, to be the first country to implement the Country Financing Roadmap. The CFR is a platform to support countries in making a transformative shift from funding to financing. It will harness the collective intelligence from the WEF’s expansive networks, and promote consensus on the main challenges that limit capital flows to Saint Lucia. It will also leverage coordinated action to move from a holistic diagnostic to a country specific tangible action plan. We are grateful for this opportunity to be the test case for this initiative and look forward to its success being replicated across those states in need.

Last April, the Foreign Ministers of the G7 expressed their support to the substantive participation of Taiwan as an active member of the international aviation community in ICAO forums. Saint Lucia endorses this call, as we believe that the exclusion of active members for political purposes compromises aviation safety and security. The G7 has now added its voice, to those who have long advocated for the inclusion of Taiwan in the work of the global community. As we continue our strides to implement the 2030 agenda for sustainable development, the participation of small states and all states in the various UN agencies and processes is critical to achieving our collective goals. We have to remain true to the agenda’s clarion call to leave no one behind. Similarly, we express our solidarity with the people of Cuba and question the continued application of the embargo.

On the issue of Venezuela, Saint Lucia continues to believe that this crisis should be resolved peacefully and through dialogue. Military action is not the answer. But let me be clear, the continued instability in that country is a threat to us all in the hemisphere. This cannot be overlooked or swept under the table.

To some this may seem like a high ideal but I submit that it is the minimum owed to states like Saint Lucia – it is indeed the object and purpose of the United Nations.