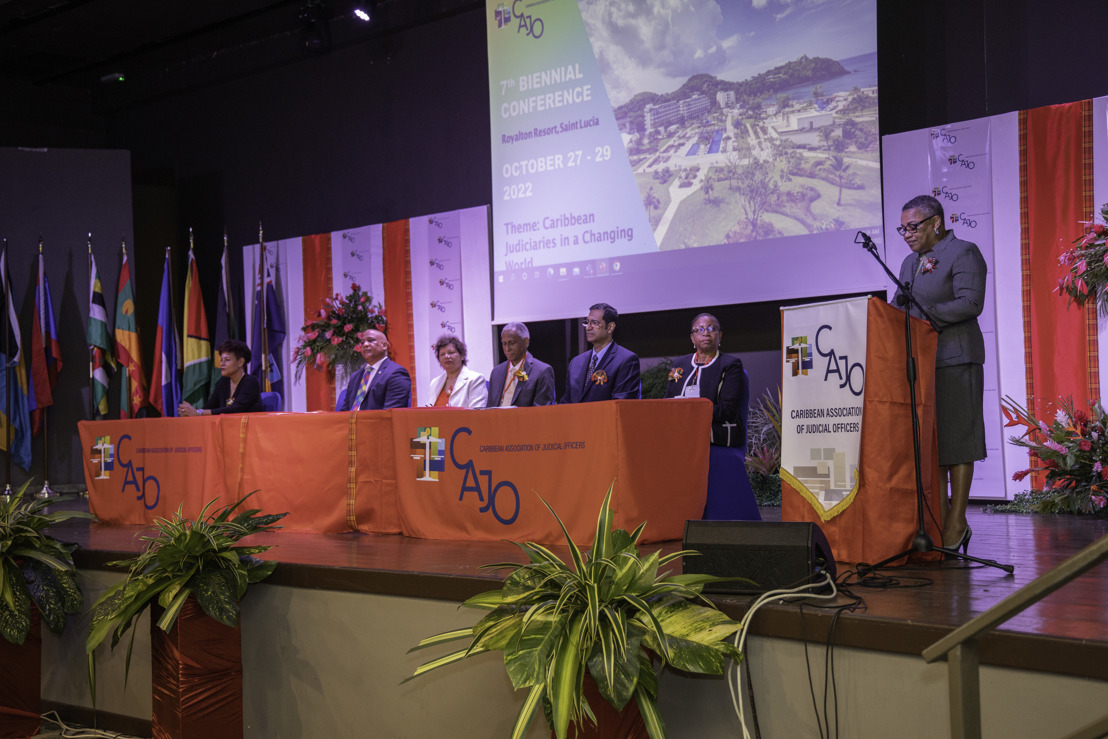 The Conference commenced with an opening ceremony which was attended by His Excellency  Cyril Errol Melchiades Charles, Acting Governor-General of Saint Lucia and featured thought-provoking remarks by the Honourable Dr Ernest Hilaire, Acting Prime Minister of Saint Lucia, the Honourable Dame Janice M. Pereira, DBE, LL.D, Chief Justice of the Eastern Caribbean Supreme Court, Her Excellency Lilian Chatterjee, High Commissioner of Canada to Barbados and the Eastern Caribbean and the Honourable Mr Justice Peter Jamadar, Chairman of CAJO and Judge of the Caribbean Court of Justice (CCJ). The Opening Ceremony’s keynote address was delivered by the Honourable Mia Mottley, SC, Prime Minister of Barbados.

In his remarks, the Acting Prime Minister Dr. Ernest Hilaire expressed his appreciation for the judiciaries in the region and affirmed the Government of Saint Lucia’s plan to have Saint Lucia accede to the appellate jurisdiction of the Caribbean Court of Justice in the short term.  Dr. Hilaire also shared his hope that this Conference would better equip judges to navigate their roles during what he characterized as ‘this post-truth era’.

Her Ladyship the Hon. Dame Janice Pereira, DBE, Chief Justice, in her remarks, implored attendees to do everything possible to keep pace with the changes in the judicial landscape and be ever engaged with an acute awareness of the challenges those changes bring.  Her Ladyship further emphasized the importance of developing new ways and means by which judiciaries respond to those changes in ensuring that “the quality of justice delivered is fit for purpose and meets the desired objective of upholding and maintaining the Rule of Law”.

Prime Minister Mottley, in her address, focused on the role of judiciaries across the region in setting the standards/benchmark on how justice is administered. The Prime Minister acknowledged and praised the judiciaries' response to technology and leading the charge concerning standardized sentencing. Further, she called for regional unity in removing antiquity from our laws, as they result in more incarceration and less efficiency.

The Conference’s second keynote address was delivered by Professor Trevor Munroe, Executive Director, National Integrity Action, Jamaica.  In his presentation, Professor Munroe focused on the public's lack of trust and confidence in the justice system and governments in the Caribbean community and why it is worrisome. Professor Munroe also explored various measures which courts could implement to reverse this low level of public confidence, including having a judicial appointments commission. Ms. Tonni Brodber of UN Women also presented on the UN Women’s Caribbean Spotlight Initiative, their work in territories and collaborations with judiciaries concerning gender-based violence.

Over three days, through plenaries and breakout sessions, these judicial officers were able to deepen their understanding of areas like digital and artificial intelligence interventions for enhancing the work of judiciaries, judicial wellness, emerging laws and cases in data privacy and data protection and the need for the Caribbean to catch up to sustain our tourism-based economies.

In his brief remarks, the Hon. Justice Adrian Saunders, CCJ President, formally announced Bermuda as the host country for the next Biennial Conference.  The CCJ President also introduced the new CAJO executive, presented resolutions from the CAJO's AGM, and announced the conferment of CAJO Honorary Member to retired Justice of Appeal Mr. Justice Christopher Blackman, a native of Barbados and founding member of the CAJO.   CCJ Judge, the Hon. Mme. Justice Maureen Rajnauth-Lee and ECSC Chief Registrar, Michelle John-Theobalds, delivered the Vote of Thanks, recognizing all of the Conference’s players and supporters.

CAJO 2022 not only focused on thematic discussions and plenary sessions. The opening and closing ceremonies for the Conference featured a vibrant display of Saint Lucian culture in productions directed and produced by Ms. Drenia Frederick.

Since the Conference coincided with the island’s celebration of ‘Jounen Kweyol’, attendees were able to experience the island’s cuisine and were treated to social events such as “The Chief Justice’s Welcome Cocktail” at the Sandals Golf and Country Club, “The Governor General’s Reception” at Government House, a soiree at the Pigeon Island Landmark under the theme “Sauce, Stars and Jazz and a boat cruise showcasing the "Helen of the West by Sea”.

The CAJO Management Committee intends to maximise the enthusiasm and interest and looks forward to the CAJO 8th Biennial Conference in Bermuda in 2024.