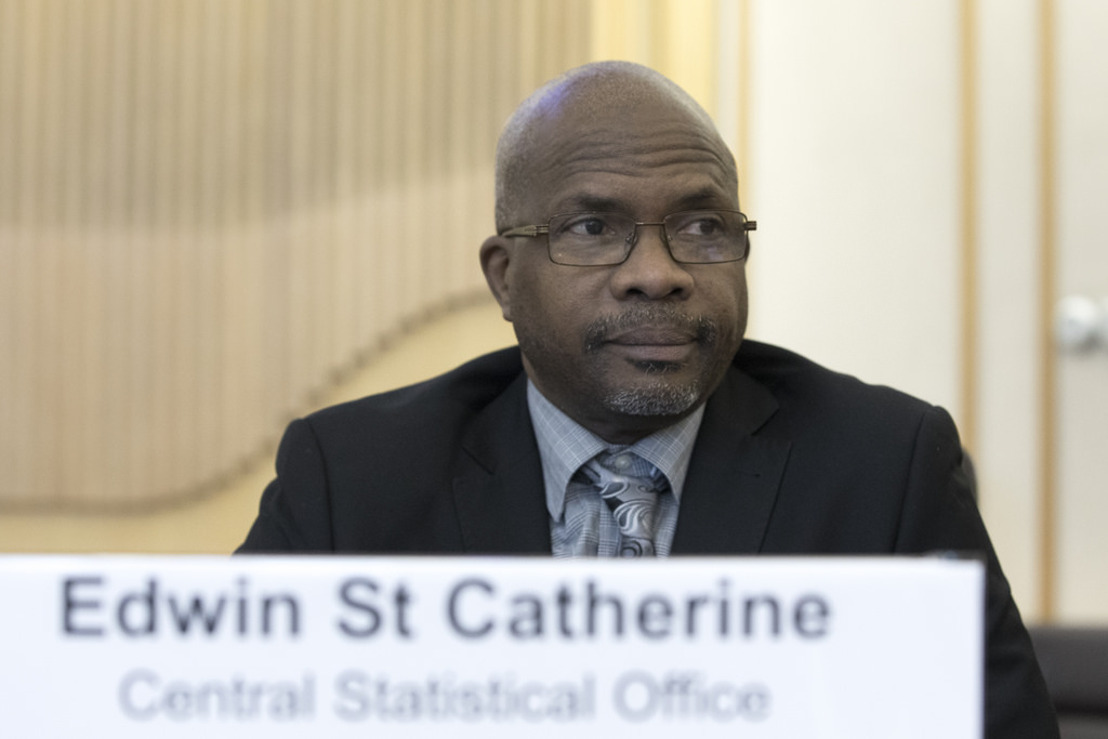 A native of Saint Lucia, Edwin St. Catherine’s passion and successful advances in the use of technology for data collection would take him throughout the Caribbean region and to the African and Asian continents to share his expertise.

Initially pursuing a career in Economics, St. Catherine recalls that his passion for statistics and statistical development grew from exposure to the subject matter and consequent development of a deep understanding for the far-reaching, and essentially life changing, effects of the data.

“It was not directly my intention to become a statistician but, by virtue of having been assigned to the statistical office, I got to really appreciate and enjoy the work and fully embrace it as time went on.”

“All of these areas that affected how people lived, how well they lived, and my ability to then package and communicate that to the policy maker, to the governments, and to international organisations.”

St. Catherine would assume the role of Director of Statistics in 1994, and worked tirelessly thereafter to improve the standards, procedures and efficiency of the Central Statistical Offices (CSOs) in Saint Lucia and the wider Caribbean region through the implementation of cutting-edge data collection technology.

Following his appointment, the process from data collection to data availability, which took up to five years at times, was cut down to a year and a half through the use of scanning technology and handwriting recognition on paper census forms.

“By 2010, we had reduced the turnaround time to about 7 months. Saint Lucia now delivers its census results within 7 months of completion of the census,” St. Catherine confirmed.

The increased use of technology to enhance statistical data collection is an area that St. Catherine expects to continue to develop in the future.

“We need to ensure that our process is dynamic because we are in a world where technology is changing.”

“There is an artificial technology that is now being built into tablet computers that allows you to take a picture of a building and the software will bring into the tablet the specifications of that building.”

Another area of interest is spatial data and the ways in which they integrate with official statistics. St. Catherine added,

"Geography is a big deal, because it is where people live. When you see a Google map, can you encircle the building and tell how many people are living there? What is the average household size? What is the level of poverty? What are the unemployment levels in this area? If you need to make an intervention, you need to know these things about the community.”

“These are some of the areas that I paid a lot of attention to and where I think I have made a contribution,” he noted.

During his tenure as Director, St. Catherine worked extensively in the areas of living conditions; poverty measurement; the labour force survey and the measurement of unemployment; prices and consumption expenditure.

Reflecting on his achievements and those of the regional statistical offices, St. Catherine highlighted the important role that policy makers play as receptors of the statistical findings and as implementers of change.

“As we have more and more statistical development in the region, a lot of truths about the population will come to light. We have to learn to embrace it.”

“Our policy makers have to be more comfortable and open with knowing the real situation.”

St. Catherine noted the difficult, and somewhat uncomfortable, relationship between a politician and a statistician given that the ‘objective truth’ which the statistician naturally seeks may or may not be favourable to the politician.

He further noted, however, that in recent years policy makers have been showing many promising signs of embracing good information when it is made available and suggested “a sort of hands-off supervision” whereby policy makers can become more involved in the process by providing advice that will improve investigations over time.

Mr. St. Catherine plans to continue his contributions to statistical development throughout his retirement, lending his expertise to the region and beyond.

“I expect to be providing advice where it is sought and sometimes where it is not sought. If I think it is required, I will certainly provide it.”

Edwin St. Catherine has worked extensively on the development and conduct of labour force surveys in Caribbean Countries. He is a registered expert with the International Monetary Fund (IMF) on inflation, price index measurement and the development of national consumption expenditure baskets. Mr. St Catherine has been Consultant Statistician to the Caribbean Development Bank and the Inter-American Development Bank on Country Poverty Assessments in most Caribbean countries for the last 15 years. He is also a member of CARICOM’s Regional Advisory Group on Statistics.

In addition, Mr. St Catherine has served on and chaired several UN Statistical Division Expert Groups including the review the World Demographic Yearbook and the development of the UN principles and recommendations for the 2010 round of Censuses. He is also a data processing/capture expert of long standing for Censuses, Household Budget Surveys and is currently responsible for implementing computer assisted personal interviewing and internet data capture systems.