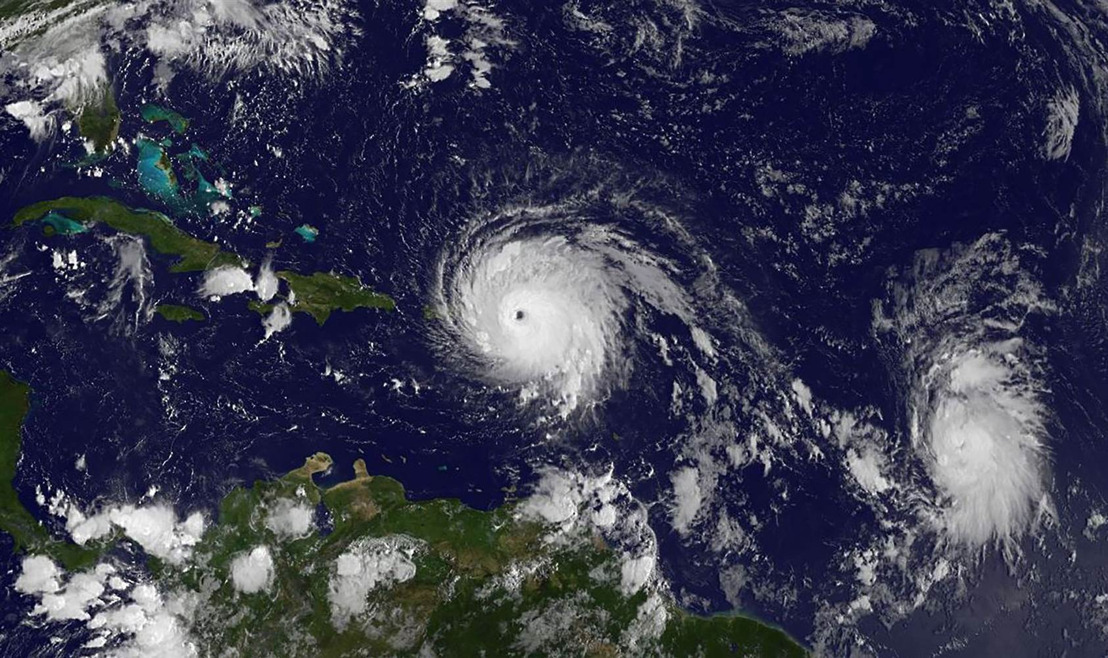 On Thursday September 07, 2017 at 800 PM EDT (0000 UTC), the eye of Hurricane Irma was located near latitude 21.1 North, longitude 71.8 West. Irma is moving toward the west-northwest near 16 mph (26 km/h), and this general motion is expected to continue for the next couple of days with some decrease in forward speed. Maximum sustained winds remain near 175 mph (280 km/h) with higher gusts. Irma is a category 5 hurricane on the Saffir-Simpson Hurricane Wind Scale. Some fluctuations in intensity are likely during the next day or two, but Irma is forecast to remain a powerful category 4 or 5 hurricane during the next couple of days.

The National Hurricane Center (NHC) indicates that on the forecast track, the eye of Irma should continue to move near the Turks and Caicos Islands and toward the southeastern Bahamas this evening, Thursday September 07, 2017. The core of the hurricane will then move between the north coast of Cuba and the Bahamas during the next day or two. Hurricane-force winds extend outward up to 70 miles (110 km) from the center, and tropical-storm-force winds extend outward up to 185 miles (295 km). The minimum central pressure based on data from the Air Force plane is 919 mb (27.14 inches).

The Caribbean Institute for Meteorology and Hydrology provided CDEMA with an impact analysis:

The models of the CIMH are in agreement with the NHC’s projections for precipitation, wind and wave heights expected as a result of the passage of Irma, Specifically CIMH impact analysis indicate:

WAVES: Significant wave heights likely to exceed 8 metres. Storm surge in excess of 4 m, rough/treacherous seas and damaging waves are imminent, leading to inundation and damages along coastlines and to coastal infrastructure especially in the Turks and Caicos and the Southern Bahamas. Areas to the south could experience rough sea conditions.

SUMMARY OF WATCHES AND WARNINGS IN EFFECT:

A Hurricane Warning is in effect for...

A Tropical Storm Warning is in effect for...

At 800 PM AST (0000 UTC), the eye of Hurricane Jose was located near latitude 15.6 North, longitude 53.2 West. Jose is moving toward the west-northwest near 18 mph (30 km/h). The hurricane is expected to continue on this heading with a slight decrease in forward speed during the next couple of days. On the forecast track, Jose is expected to be near the northern Leeward Islands on Saturday.

SUMMARY OF WATCHES IN EFFECT:

A Hurricane Watch is in effect for...

A Tropical Storm Watch is in effect for...

Initial reports only are emerging from impacted CDEMA Participating States as of September 7, 2017. These have revealed the following:

No immediate needs were identified

PREPARATIONS FOR PASSAGE OF HURRICANE IRMA

Assistance is also requested for supplies of food, water and tarpaulin to be provided to islands in the south based on the needs identified through the reconnaissance

Evacuation order was undertaken for:

Office for the Coordination of Humanitarian Aid (UN OCHA)

CDEMA continues to monitor the system and provide updates as necessary.