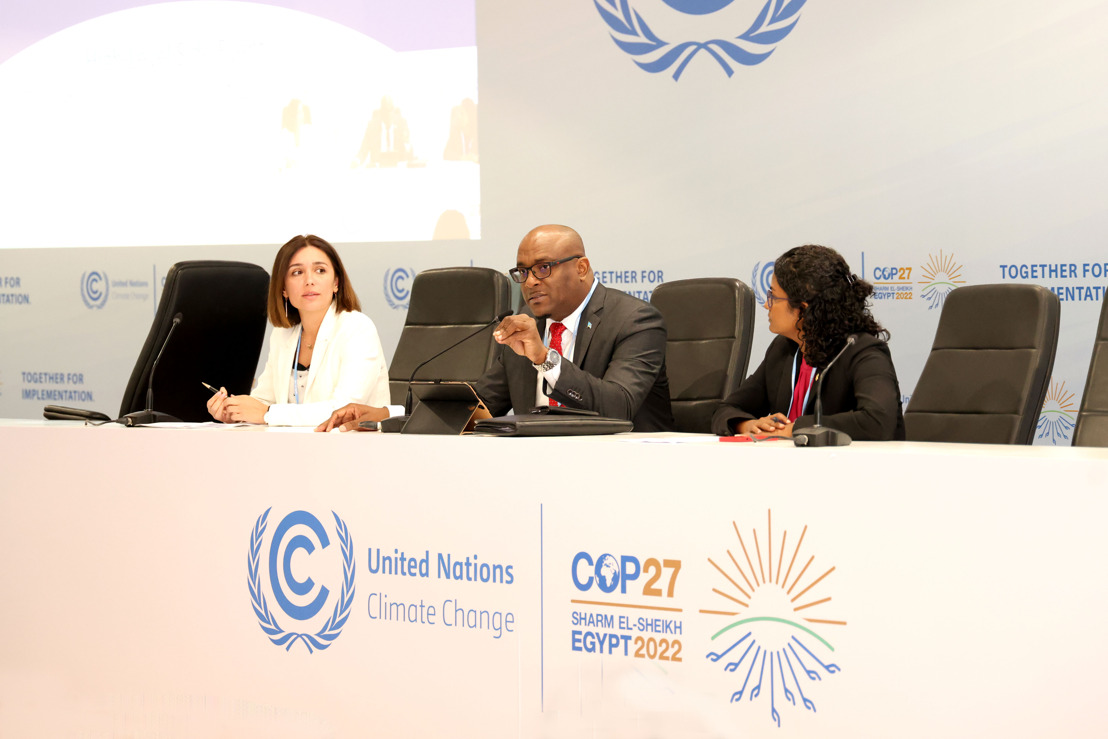 Honourable Shawn Edwards, Minister for Education, Sustainable Development, Innovation, Science, Technology and Vocational Training in Saint Lucia made an impassioned plea on the global stage of COP27 in Sharm El Sheik Egypt, for Small Island Developing States to receive climate financing for loss and damage due to the effects of climate change. Minister Edwards made his address during a high-level COP27 panel discussion today, November 10, which included H.E Nino Tandilashivili,  Deputy Minister in the Ministry of Environment and Agriculture of Georgia, and H.E Aminath Shauna, Minister of Environment, Climate Change, and Technology in the Republic of Maldives.

The panel discussed the issues developing countries face as a result of climate change, and the financing needed to address them. Developing countries have faced mounting pressure during this United Nations Climate Change Conference (UNFCCC) to make financing available to countries facing the most severe impacts of climate change, yet are the lowest emitters of greenhouse gases – carbon dioxide being the primary one emitted through human activity.

Minister Edwards told the gathering that a few days ago, Saint Lucia faced an unprecedented storm on a scale which persons had not experienced in a lifetime. “Homes were damaged, vehicles were floating in the streets like paper, schools were impacted and the initial assessment we were estimating was somewhere in the region of 6-8 million dollars, and all of this happened in approximately the space of three hours. These are weather systems that visit us in Saint Lucia and the Caribbean with a degree of frequency that we have not seen before and everytime they come, they leave us in tatters. We have to find resources to build back, to reconstruct.”

Twelve years ago in Copenhagen, developed countries pledged $100 Billion annually to less wealthy nations to mitigate and adapt to rising in global temperatures. However, this promise has not been kept, thus every year, the frustration of world leaders increases as their countries deal with the adverse effects of violent hurricanes, extreme flooding, and extreme drought. These new phenomena have given rise to food security issues, increased national debt – as countries borrow money to recover from these cataclysmic events – and loss in GDP.

Edwards lamented that “every year, at every forum, at COP, at UNEP, you will hear the global pronouncements being made time and against that there are monies being pledged for Small Island Developing States, but it never reaches our treasury. And when proposals are written and submitted to the International financial agencies for support, there is always an inadequacy in the proposal you submit.”

Climate change poses steep challenges to Small Island Developing States in the OECS, and regional leaders are constantly seeking means to overcome them, build resilience in their economy and advocate for international, regional, and local policy that will ensure their survival for future generations.