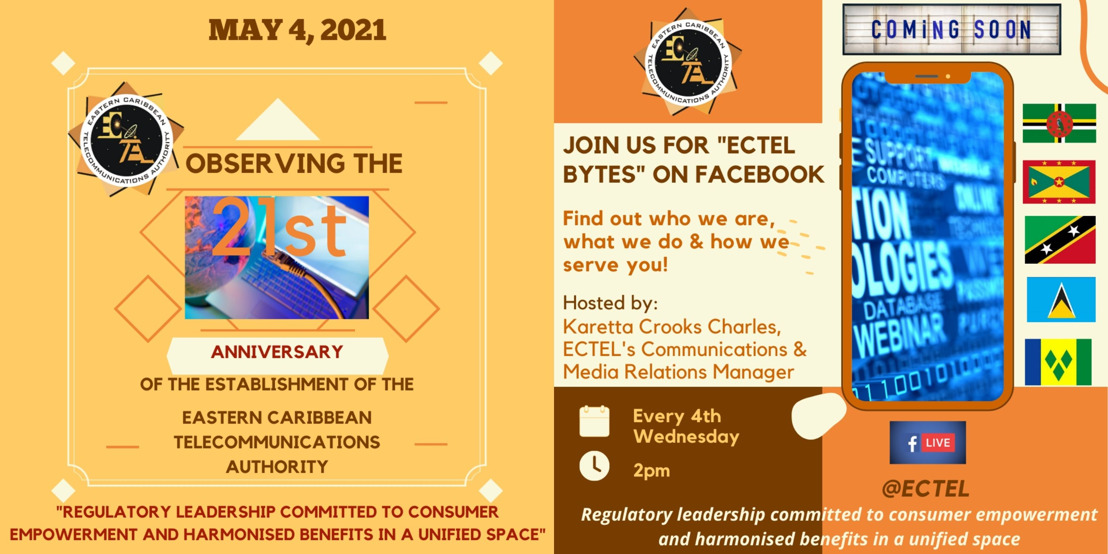 Castries - Saint Lucia – 4th May 2021 –The importance of electronic communications has become more apparent since the onslaught of the COVID-19 pandemic. Service providers and regulators around the globe are expected to ensure customers are connected virtually considering the heightened restrictions to keep the disease at bay through social distancing. The Eastern Caribbean Telecommunications Authority (ECTEL), the regulatory body advising the National Telecommunications Regulatory Commissions (NTRCs) on Electronic Communications/Telecommunications matters in its five member states of the Commonwealth of Dominica, Grenada, the Federation of St. Kitts and Nevis, Saint Lucia and St. Vincent and the Grenadines was established by Treaty signed on May 4th, 2000 in St. George’s, Grenada. ECTEL is mandated to ensure that the people of its member states benefit from affordable, modern, efficient, competitive and universal telecommunications services.

To raise greater awareness about the organization, ECTEL will be launching a Facebook Live show called “ECTEL Bytes” every 4th Wednesday from 2 p.m. (Saint Lucia time). The show will be launched on World Telecommunications and Information Society Day (WTISD) on May 17th. The Authority is also planning a Virtual Lecture around the WTISD theme: Accelerating Digital Transformation in Challenging Times to be held later in June.

In its continued effort to engage the public, on April 30th in observance of #GIRLSinICT Day, ECTEL partnered with Melisha Toussaint, Janique-ka John, Cheyenne Polius, and Mindy-Luquiana Chicot - four young trailblazing women from the Eastern Caribbean who are making strides locally and internationally in the field of Information and Communications Technology (ICT) and Science, Technology, Engineering, Arts and Mathematics (STEAM). They each made an inspiring virtual presentation to hundreds of students across the Caribbean to inspire boys and especially girls to harness their love for ICT. To watch the #GIRLSinICT Day presentations and see the rules for the follow up competition, please visit our Facebook page: https://www.facebook.com/ectel/.

ECTEL’s Managing Director, Mr. Andrew Millet said the organization has accomplished quite a bit over the years. He disclosed that:

“Since 2009 we began the process of replacing the Telecommunications Act in force in the ECTEL Contracting States with the new Electronic Communications Bill (EC Bill). The EC Bill includes, among other things, provisions to broaden the scope of regulations from telecommunications to Electronic Communications, and to address matters including but not limited to: mergers and acquisitions within the ECTEL Contracting States, preservation of an open Internet with the adoption of Net Neutrality provisions, the establishment of the NTRCs as body corporates, the setting up of a tribunal independent of the NTRC, to hear unresolved disputes between telecommunications providers and customers, and the inclusion of more penalties for breach of the legislation.”

Additionally, in 2019, ECTEL spearheaded the implementation of mobile number portability which enables customers in the five (5) member states to change their service provider while keeping their mobile numbers. The organization, through the NTRC in St. Vincent and the Grenadines, donated twenty-four (24) pallets of water to people who have been adversely affected by the recent eruptions of the La Soufrière Volcano.

Despite the challenging times, ECTEL continues to practice regulatory leadership committed to consumer empowerment and harmonised benefits in a unified space.