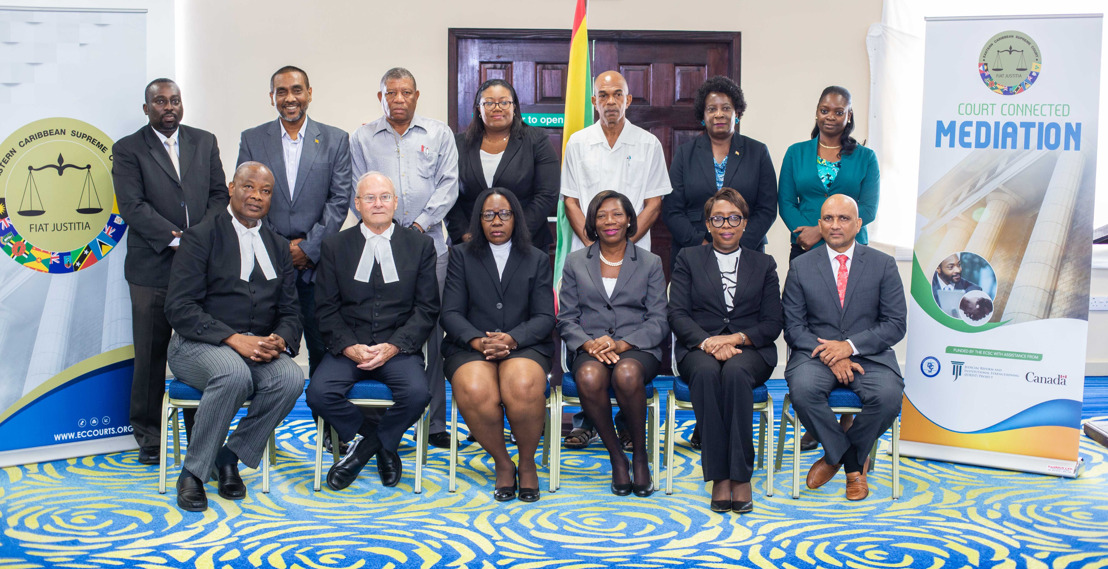 The launch was attended by judicial officers of the Eastern Caribbean Supreme Court, the Hon. Attorney General of Grenada, Senator Christopher De Allie, Legal Practitioners from the private and public bar, Members of the Media, Students from Grenadian Secondary Schools and Members of Staff of the ECSC Headquarters and the Grenada High Court.

Her Ladyship, the Honourable Justice Gertel Thom, Justice of Appeal shared with the audience some of the year-long activities planned as part of the public awareness campaign, which includes town hall meetings, panel discussions on the National Television Network, a College Open Day to promote Mediation, among other activities. These activities will be rolled out over the next twelve months throughout the length and breadth of Grenada to sensitise Grenadians to the Court’s mediation programme.

The keynote address was delivered by His Lordship The Honourable Justice Davidson Kelvin Baptiste, Justice of Appeal on behalf of the Honourable Chief Justice who was unavoidably absent. His Lordship shared some of the key benefits of court-connected mediation and gave a historical overview of mediation, highlighting that it is not a new concept and that in fact, mediation has been used successfully for hundreds, if not thousands, of years.

His Lordship also used the opportunity to inform the attendees that mediation significantly reduces time, costs and stress; and pointed out that on the other hand, litigation can deprive parties of many years of time, effort, peace of mind and opportunity.

In mediation, the resolution happens quickly—often in one session on one day!

His Lordship also urged Grenadians to make use of the advantages of mediation and not hesitate to mediate.

Senator Christopher De Allie and the Hon. Attorney General, Mr. Darshan Ramdhani, pledged their personal support and the support of the Government of Grenada for the ECSC Court-Connected Mediation Public Awareness Campaign.  They stated that it was their hope that when citizens and residents become more aware of the benefits of mediation, they will use it as the first step towards resolving disputes, whether in commercial transactions, in the community or in the workplace.

Immediately after the launch, there was a cocktail reception where the appreciative and lively gathering took the opportunity to mingle and further discuss mediation.

Please stay tuned to the ECSC website and the media for further updates about the Court-Connected Mediation Public Awareness Campaign.

About the Eastern Caribbean Supreme Court:

The Eastern Caribbean Supreme Court (ECSC) was established in 1967 by the West Indies Associated States Supreme Court Order No. 223 of 1967. The ECSC is a superior court of record for the Organization of Eastern Caribbean States (OECS), including six Independent States: Antigua and Barbuda, the Commonwealth of Dominica, Grenada, St. Kitts and Nevis, Saint Lucia, St. Vincent and the Grenadines; and three British Overseas Territories: Anguilla, The Virgin Islands, and Montserrat. The Court has unlimited jurisdiction in each Member State and Territory.

To learn more about the Eastern Caribbean Supreme Court and the e-Litigation Portal please visit our website at: www.eccourts.org or call us at Tel: 758-457-3600.