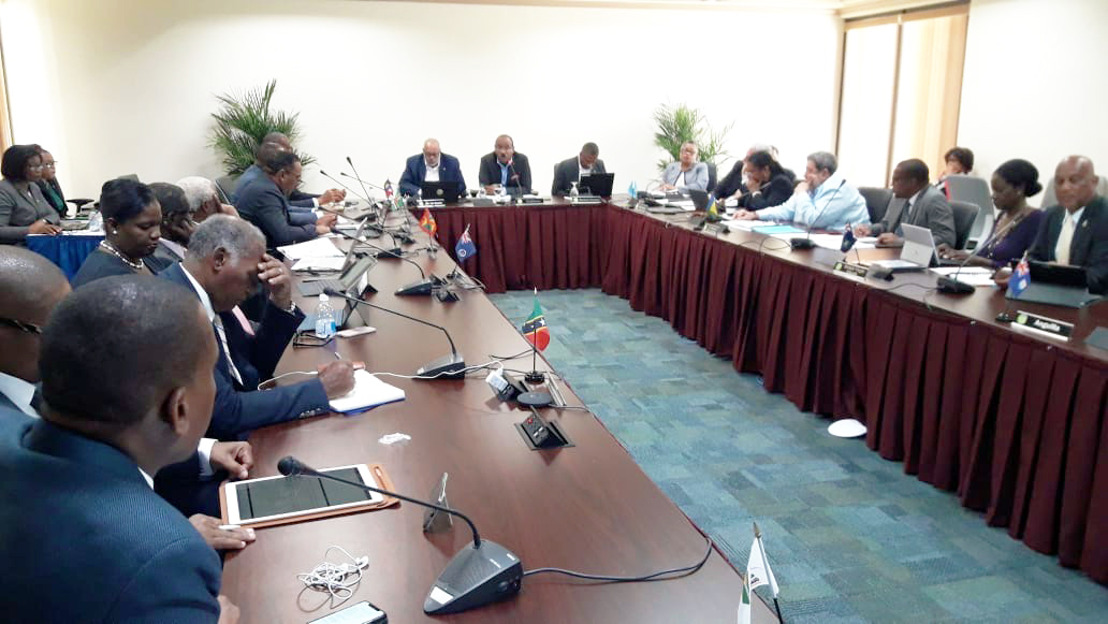 Dr. Didacus Jules, Director General of the OECS, and the following Commissioners were also in attendance:

Other Members of Delegation in attendance were:

In the main, the Meeting focused on, inter alia:

(a) Civil Aviation and Air Services

(c) Consolidation of Efforts in Trade, Agriculture and Fisheries

(g) Recognition of the RTB in the RTC

Other items proposed on the agenda were deferred for a subsequent meeting. The Authority agreed that this would allow an opportunity for deep discussion by, and with, Heads in relation to these matters of concern for the OECS.

(A) CIVIL AVIATION AND AIR SERVICES

The Authority reviewed recent reports by the International Civil Aviation Organisation (ICAO) and the United States Federal Aviation Administration (FAA) on the status of Eastern Caribbean Civil Aviation Authority (ECCAA). Heads of Governments also received an update on the initiatives that have already been implemented within the ECCAA following the recommendations of the two bodies.

The Meeting recommended a thorough review of the ECCAA with a view to modernise operations given the many challenges facing the aviation industry.

OECS Heads of Governments continued discussions on the reestablishment of joint diplomatic representation in Ottawa, Canada. Heads further agreed on common OECS positions ahead of the upcoming meeting with the Prime Minister of Canada, the Rt. Honourable Justin Trudeau.

The Meeting also received a report on the Brussels Mission and discussed the appointment of an ambassador.

(C) CONSOLIDATION OF EFFORTS IN TRADE, AGRICULTURE AND FISHERIES

The Meeting received an update on the consolidation of efforts in the areas of trade, agriculture and fisheries. Heads of Governments granted their support to a joint meeting of ministers in these three economically critical areas.

The Authority deliberated extensively on the sustainable financing of the OECS Commission and the Eastern Caribbean Supreme Court (ECSC). The Meeting discussed the financial obligations of Member States and considered various measures to ensure the adequate budgeting and funding of both institutions. Heads of Governments mandated the Governor of the Eastern Caribbean Central Bank (ECCB) and the Director General of the OECS Commission to research and make proposals to The Authority on the viability of an automatic payment mechanism with a view to improve the timeliness of subvention payments.

Heads also considered a presentation by the Governor of the ECCB on the feasibility of a trust fund for the Court.

Heads of Governments approved a series of new policies that will guide the OECS’ efforts to gain recognition and accreditation to key funding bodies that include the Global Climate Fund (GCF), the Global Partnership for Education (GPE) and European Union Commission.

The Authority approved the OECS Commission's submission to the jurisdiction of the Caribbean Community Administrative Tribunal.

(G) RECOGNITION OF THE RTB IN THE RTC

The 69th Meeting of the Authority would be held on June 18th 2020 in the Commonwealth of Dominica.

All Heads and their representatives expressed their deep appreciation of the hospitality extended by the Government and people of St. Kitts and Nevis and the Eastern Caribbean Central Bank and looked forward to the speedy implementation of decisions made at the meeting.