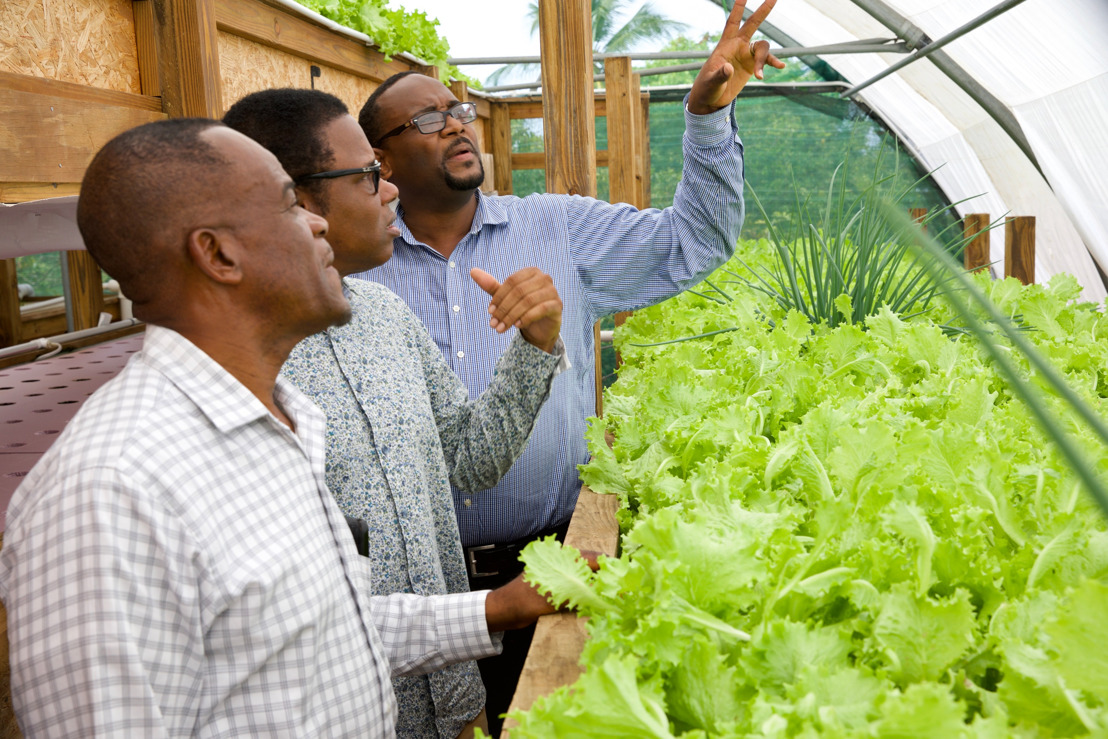 This potential was highlighted by the recent visit to the Choiseul aquaponics facility and mobile desalination plant in Laborie in Saint Lucia by both the Hon. Dean Jonas, Minister of Agriculture of Antigua and Barbuda and Mr. Jedidiah Maxime, Director of the Ministry of Agriculture, Lands, Fisheries, and Barbuda Affairs.

Minister Jonas said that while the OECS faced an unacceptably high food import bill, the region also faced an unprecedented opportunity to lead the way in aquaponics which needs 90% less land and water than agriculture but has the potential to generate 3 to 4 times more food than the latter.

“While traditional farming will always remain the backbone of the OECS agricultural industry and is envisaged to expand with the support of enterprises such as the agri-shipping initiative, we must also expand investment in complementary food production techniques such as aquaponics and hydroponics where sometimes limited agriculture land tenure and space demand creative new ways of food production” said Minister Jonas.

“An aquaponics industry can facilitate the rearing of fish for high value protein concurrently with green leafy vegetables, beans, peas, radishes, onions, herbs and other produce which as an import substitution measure can help reduce dependence on these foreign imports.

“I commend the Choiseul facility for helping pioneer the important role aquaponics can not only play in driving economic activity but also in ensuring food security through the production of more eco-friendly, nutritious and high-value produce for local communities” said Minister Jonas.

OECS Director General Dr. Didacus Jules said the Choiseul aquaponics facility was a model for the rest of the OECS to replicate for the highly efficient use of existing space for more economical food production.

“Crops may be produced according to the interests of growers and local demand and notably production is generally more environmentally sustainable than traditional farming" said Dr. Jules.

“Depending on market trends, crop production can be rapidly accelerated according to local, tourism and export demand.

“There is also an opportunity for small holders and young people seeking a career in complementary agricultural technologies to enter aquaponics, both as a commercial venture and as way to produce food for local consumption.

“However, public-private investments in the right frameworks of support and infrastructure will be required beyond present capacity and to this end we will also be seeking to engage our development partners further as part of an existing coalition of support to the OECS’s agriculture industry” said Dr. Jules.

This story aligns with OECS Strategic Objective No.4: Assure the Security and Well-being of Citizens.