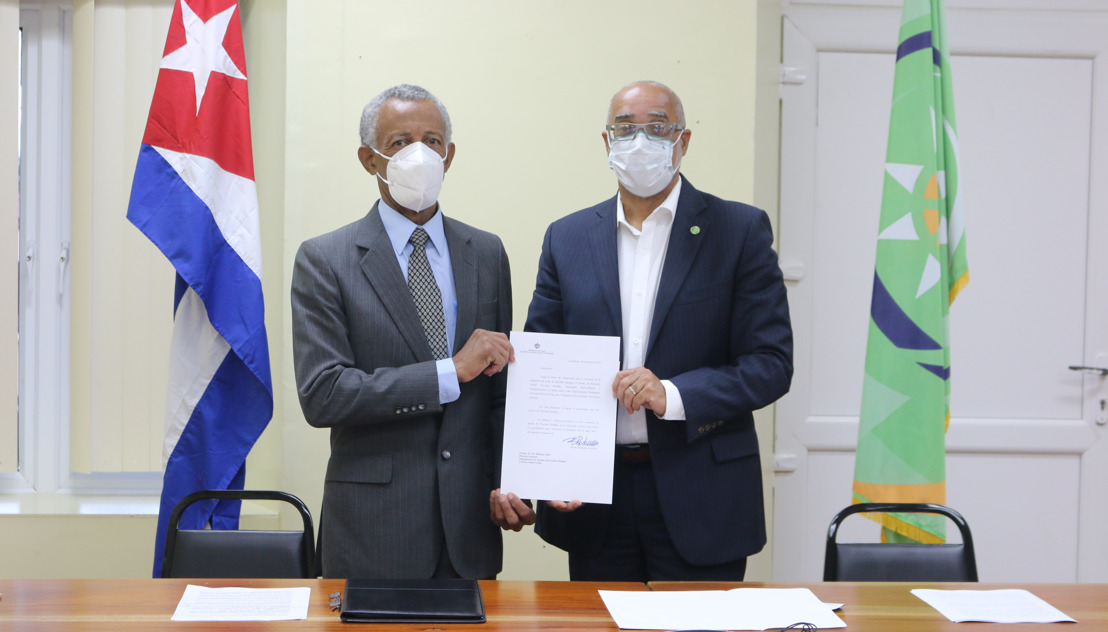 Ambassador Toscano expressed pleasure in being able to present his Letter of Credence in person, particularly at a time when the ongoing Coronavirus pandemic prohibits face-to-face meetings.

In presenting his Letter of Credence, Ambassador Toscano informed that it was a real honour to have the opportunity to work with the Commission in order to strengthen the traditional friendly relationship and solidarity which exist between Cuba and the OECS, and with other sister Caribbean nations. The Ambassador expressed gratitude for the OECS’ expressions of support and solidarity with the Cuban people. In that regard, he remarked that the eruption of the volcano in Saint Vincent and the Grenadines last year, a disaster which was exacerbated by the Coronavirus pandemic, allowed an opportunity for the world to witness the power of solidarity in the Caribbean region.

In accepting the Letter of Credence, the OECS Director General stated:

Cuba and the Caribbean, including the OECS, have a long and deep tradition of friendship characterized by constancy on both sides. The OECS region has over the years been consistent in opposing the illegal blockade of Cuba by the United States of America. Cuba, for its part has given reliably and unhesitatingly of all that it has to offer.

In his further comments on the strong bonds of friendship and cooperation between the OECS region and Cuba, the Director General asserted:

It is precisely because of the punitive conditions imposed on Cuba, that the OECS attaches an even greater value on the assistance rendered by Cuba, in many areas including education and human resource development, health, sports and culture, to name a few. The great Lebanese poet Kahlil Gibran said ‘You give but little when you give of your possessions. It is when you give of yourself that you truly give.’ And Cuba has truly given of herself in blood, as well as in scarce coin.

Concerning the impact of Cuba’s assistance on the development of the region, the Director General said:

Many OECS nationals have benefitted from university scholarships and professional training, the restoration of sight through Operation Miracle, and the receipt of medical attention that was otherwise unaffordable.

The Director General welcomed the Ambassador to the OECS, and underscored the Organisation’s commitment to enhanced cooperation with Cuba in areas of mutual interest for the well-being of the peoples of Cuba and the OECS region.

During a courtesy meeting which immediately followed the Ceremony, the Director General and the Ambassador exchanged views on various development cooperation matters.  Both sides agreed to commence in-depth discussions in the immediate future, in order to pursue the common objective of deepening relations.

Formal diplomatic relations between the OECS and the Republic of Cuba were established in 2011.