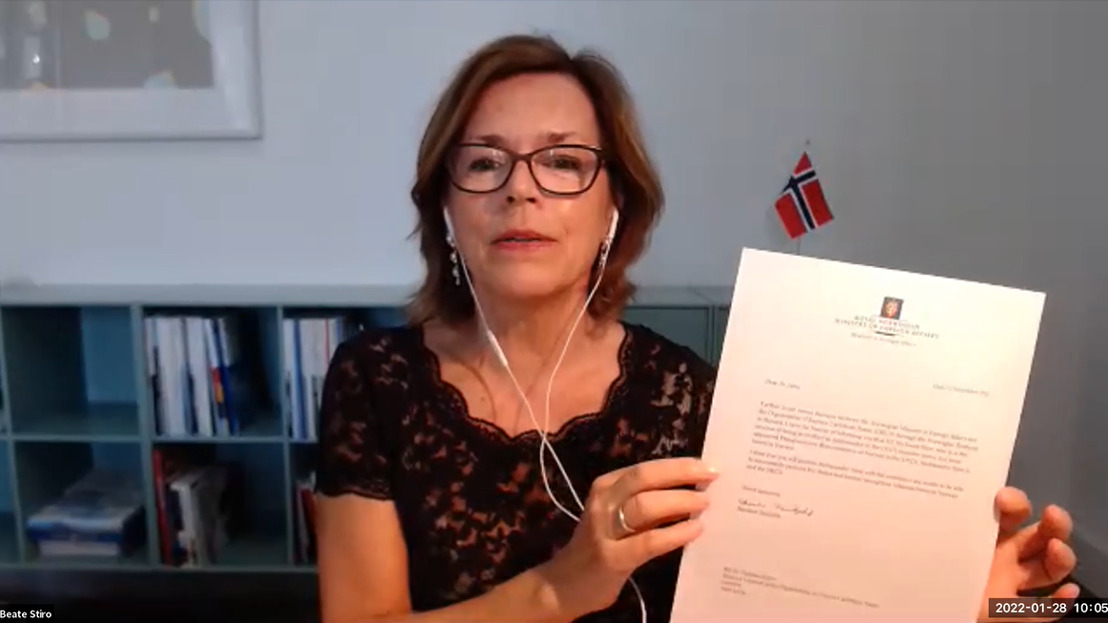 In presenting her Letter of Credence, Ambassador Stirø expressed gratitude for being able to do so virtually, in light of the ongoing Covid-19 pandemic which continues to dominate national and international agendas, as well as individual lives. The Ambassador however noted that key lessons learnt relate to the need for preparedness and increased international cooperation.  She informed of the efforts by Norway to contain the virus globally, via its contribution of over 25 million vaccine doses through the COVAX facility which has benefitted Member States of the OECS.

Ambassador Stirø informed that her accreditation to the OECS is evidence of Norway’s increased engagement and commitment to partnership with the region, particularly in matters relating to the oceans which play a fundamental role in efforts to achieve the Sustainable Development Goals (SDGs) and to build resilience to climate change. The Ambassador conveyed Norway’s appreciation for the support of the OECS in highlighting the need for increased cooperation and agreements to fight marine litter and the spread of microplastics.

In closing her remarks, the Ambassador commended the OECS on progress made in regional integration since its establishment in 1981, as well as for the Organisation’s creativity and ability to engage and inspire.

The Director General expressed pleasure in accepting the Letter of Credence, and stated,

In his further comments on the good relationship and cooperation between the OECS region and Norway, the Director General pointed out,

“The OECS places great value on its relationship with Norway and is very appreciative of the assistance received.   Our oceans are under threats from the effects of climate change, pollution and loss of biodiversity.  The support of Norway towards the maintenance of healthy oceans is invaluable, since they are essential for the implementation of the Sustainable Development Goals.”

The Director General welcomed the newly accredited Ambassador to the OECS and wished her a successful tenure.  He reaffirmed the Organisation’s commitment to strengthen cooperation with Norway in areas of mutual interest.

During a courtesy meeting which immediately followed the ceremony, the Director General and the Ambassador exchanged views on possible new areas for joint cooperation initiatives.  Both sides agreed to commence discussions in the immediate future, in order to pursue the common objective of deepening and strengthening relations.

Formal diplomatic relations between the OECS and the Kingdom of Norway were established in 2019.